Samantha Stosur is looking forward to the prospect of defeating Serena Williams in US Open once again. 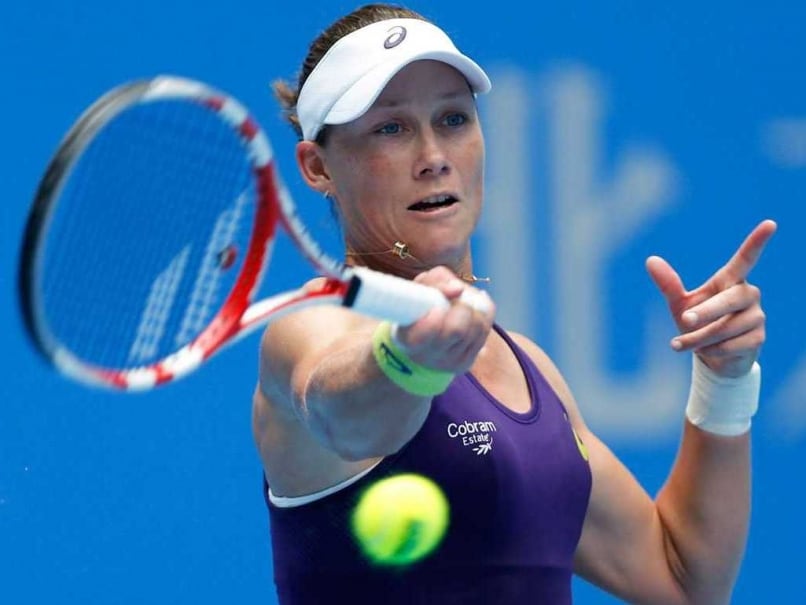 Samantha Stosur, the last woman to beat Serena Williams at the US Open, likes her chances of disrupting the American star's calendar Grand Slam bid if she gets the chance.

"I've always actually quite enjoyed playing Serena. I've got a game that disrupts her," Stosur said Wednesday. "You have to have the game. My game matches up well against Serena. I've got the kind of weapons that can bother her."

And the 31-year-old Australian advises rivals to play their own games and keep the pressure on the world number one if they hope to derail her bid for a fifth Slam title in a row when the Flushing Meadows fortnight begins August 31.

"No doubt she is going to be feeling the pressure, as much as you can when you've won four Slams in a row and going for a fifth," Stosur said. "You know she wants to get that calendar Slam. She's not immune to the nerves and pressure.

"You have to go after it. Whatever it is you do, you have got to bring that at the big moments and make it happen."

Coming off a clay-court title at Bad Gastein, second seed Stosur advanced to the quarter-finals of the WTA and ATP Washington Open with a 6-1, 7-5 victory Wednesday over American Irina Falconi.

Stosur, ranked 21st, won her only Grand Slam title at the 2011 US Open by defeating Williams 6-2, 6-3 in the final. Since then, Williams has been the queen of Arthur Ashe Stadium, winning three US Open titles in a row in a run of taking eight of the past 13 Slam singles trophies.

And despite Williams leading their career rivalry 8-3 (not counting two Stosur wins by walkover) and having won their past four meetings without dropping a set, Stosur takes confidence from a 2-1 record in their Grand Slam meetings, having lost in the fourth round of the 2010 Australian Open but won 6-2, 6-7 (2/7), 8-6 at the 2010 French Open semi-finals as well as in the US Open final.

"Playing her on one of those big stages, you see what the benchmark is and how you have to get about playing it," Stosur said.

"I've gone out there and gotten blasted but I also know that on any given day I can go out there and win and that's quite exciting."

With her Australian Open, French Open and Wimbledon triumphs this year, Williams has completed the "Serena Slam" of holding all four trophies at once for the second time in her career, the first time in a run from the 2002 French Open to the 2003 Australian Open.

In addition to joining American Maureen Connolly, Aussie Margaret Court and Germany's Steffi Graf as the only women to complete the calendar-year singles Grand Slam, Williams can match Graf's Open Era record of 22 career Grand Slam singles titles by winning the US Open. That would put her two shy of Court's all-time record 24 Slam singles crowns.

"It's incredible what Serena is trying to achieve and what she has achieved. She is the best player of this generation by far," Stosur said. "She deserves all the accolades she gets. To come back and win and play all those big moments really well, it's really amazing."

That said, Stosur also says that Williams and her bid at more tennis history is not the focus of other players, noting, "None of us are really sitting around the locker room saying how great Serena is."

Comments
Topics mentioned in this article
Samantha Stosur Serena Williams Tennis
Get the latest updates on T20 World Cup, check out the T20 World Cup Schedule and Live Score . Like us on Facebook or follow us on Twitter for more sports updates. You can also download the NDTV Cricket app for Android or iOS.