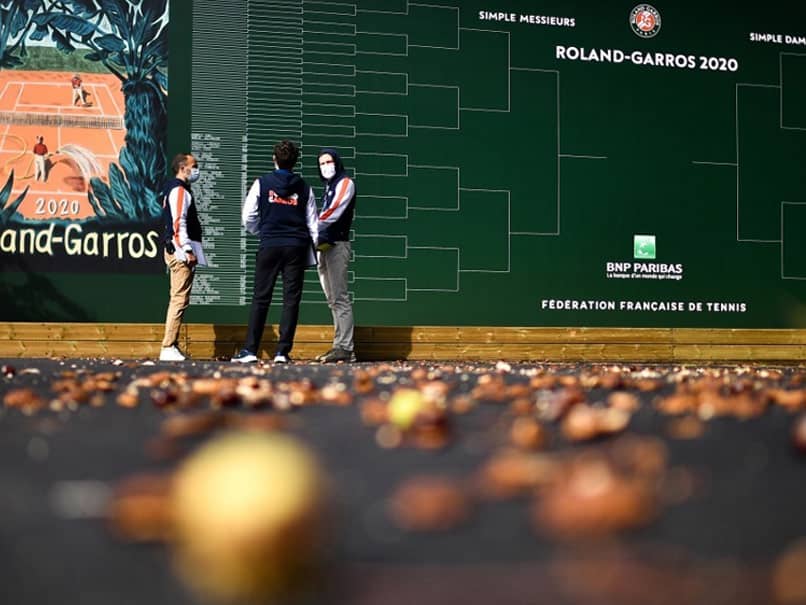 Roland Garros gets underway in chilly, damp Paris on Sunday still in the grip of the coronavirus.© AFP

Roland Garros gets underway in chilly, damp Paris on Sunday still in the grasp of the coronavirus which organisers had hoped they would escape by unilaterally pushing back the clay court Grand Slam event by four months. Opening day will see 2018 champion Simona Halep start her bid for a third major while 40-year-old Venus Williams kicks off her 23rd French Open. Andy Murray takes on fellow three-time Grand Slam champion Stan Wawrinka in the day's marquee tie in a rematch of their epic 2017 semi-final duel.

However, it will be an eerily unfamiliar tournament, even for defending champion Rafael Nadal, chasing a 13th Paris title, and 2016 winner and world number one Novak Djokovic, as well as Serena Williams, pursuing an elusive 24th major.

A resurgence of Covid-19 cases means that only 1,000 spectators will be allowed into the grounds each day.

'Millions up in smoke'

"Tens of millions of euros have gone up in smoke," said French Tennis Federation (FFT) marketing chief Stephane Morel as he mourned the loss of ticket income.

Players, meanwhile, have been confined to two tournament hotels with tight restrictions on their movements.

It's at the hotels where they undergo Covid-19 testing, a source of controversy and recrimination in the build-up.

Last weekend, five players due to take part in men's qualifying were stood down.

Popovic told L'Equipe it was a "scandal" and had "(Rafael) Nadal been in our shoes, he would have had the right to a second or third test".

On Friday, veteran Spaniard Fernando Verdasco said he was "outraged and frustrated" after being withdrawn following one failed Covid-19 test which he claimed fell between a steady stream of negative results.

Verdasco said he should have been allowed a second test.

Inside the grounds of Roland Garros, situated in the prosperous western district of Paris, there are further signs of the effect of the pandemic.

Normally bustling shops, food outlets and other commercial stalls have been shuttered.

Everyone at the tournament, including players if they are not in action or in practice, is masked. Hand sanitisers dot the site.

Instead of the early summer sun usually associated with the tournament in its traditional May-June slot, players will shiver in 16 degrees (60F) on Sunday with rain and high winds forecast for the first week.

That should mean overtime for the new retractable roof over the showpiece Court Philippe Chatrier.

On court Sunday, Halep, the top seed in the absence of world number one Ashleigh Barty, who opted not to defend her title on health grounds, takes on Spain's Sara Sorribes Tormo, ranked at 70.

Wimbledon champion Halep is the favourite especially with US Open champion Naomi Osaka missing through injury.

In 2017, the Swiss prevailed in a five-set semi-final, a match so gruelling that it contributed to Murray's lengthy battle with a hip injury which pushed him to the brink of retirement.

The day after sister Serena celebrated her 39th birthday, 40-year-old Venus Williams, who made her debut in Paris in 1997, takes on Anna Karolina Schmiedlova of Slovakia.

Nadal, bidding to win a 13th Roland Garros and move level with the absent Roger Federer on a record 20 majors, plays Monday.

However, the 34-year-old Spanish star says this year's tournament will be his "most difficult ever".

He has also complained about the new Wilson ball being used, claiming it's too heavy and potentially dangerous.

Djokovic, chasing an 18th major, will get underway on Tuesday boasting a record in 2020 of 31 wins and just one loss due to his US Open default when he swiped a ball away in frustration and struck a line judge.

"I will make sure I don't make the same mistake twice," said the 33-year-old Serb who faces Sweden's Mikael Ymer in the first round.

Novak Djokovic Rafael Nadal Tennis
Get the latest updates on IPL 2021, IPL Points Table , IPL Schedule 2021 , live score . Like us on Facebook or follow us on Twitter for more sports updates. You can also download the NDTV Cricket app for Android or iOS.