French Open 2020: Petra Kvitova made the semi-finals for the first time in eight years by defeating Laura Siegemund 6-3, 6-3. 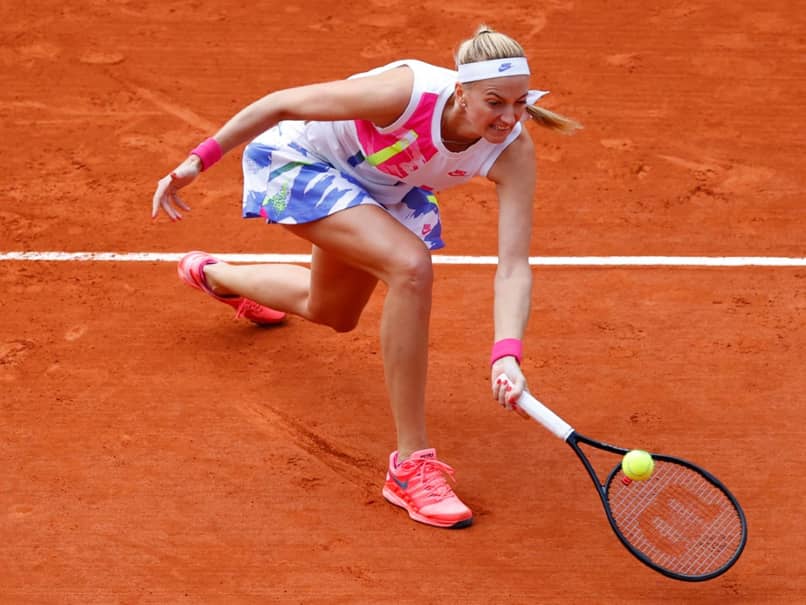 Petra Kvitova will face Sofia Kenin for a place in Saturday's final.© AFP

Petra Kvitova returned to the French Open semi-finals for the first time in eight years on Wednesday after defeating Germany's Laura Siegemund 6-3, 6-3, describing Roland Garros as her "lucky place". Czech seventh seed Kvitova, a two-time Wimbledon champion, will face either Australian Open winner Sofia Kenin or Danielle Collins for a place in Saturday's final. "It means a lot to be back in the semi-finals," said 30-year-old Kvitova who was beaten by eventual champion Maria Sharapova when she made the same stage in 2012.

"After my last match, I was very emotional to be in the quarter-finals. Now I am in the semis. I never imagined this would happen after everything that has happened.

"This is my lucky place."

It was Paris where Kvitova made her comeback in 2017 after spending six months recovering from a terrifying knife attack at her home in December 2016.

The frenzied assault required a four-hour operation and left her with damaged ligaments in her playing hand. Doctors warned her that her career may be finished.

On Wednesday, Kvitova fired 22 winners and six aces past 32-year-old Siegemund, the world number 66 who was playing in the quarter-finals of a Slam for the first time.

One break of serve in the opener was enough for Kvitova while five more breaks followed in the second set.

Kvitova, who has yet to drop a set at the tournament, claimed victory when Siegemund served up a third double fault of the tie.

"I am happy to be here and to be able to compete with the best especially in these conditions -- roof open, roof closed, sunshine, windy."

Fourth seed Kenin, 21, has developed a knack of working her way out of trouble in Paris, twice recovering from a set down en route to the last eight.

In her last 16 win over Fiona Ferro she overcame a first-set blip and partisan crowd, displaying a steely resilience while raising her game to another level.

The 21-year-old says she needs "step up" again having reached the quarter-finals of a major for just the second time, but she has a fondness for Paris having knocked out Serena Williams on her way to the last 16 in 2019.

Collins, 26, is a late bloomer after taking the college route in the US, twice capturing the national singles title while at Virgina.

"I think those are the experiences that give us the strength to go out on court and play so intensely in high-pressured moments."

She is another battle-hardened player, notably rallying from a double break down in the final set to knock out 2016 champion Garbine Muguruza in the third round.

The 57th-ranked Collins, who has fired an impressive 140 winners in four rounds, beat Kenin in straight sets in Adelaine earlier this year and is aiming to match her run to the 2019 Australian Open semi-finals.

Thursday's other semi-final will see Polish 19-year-old Iga Swiatek tackle Argentina's Nadia Podoroska, the world number 131 who is bidding to become the first qualifier to reach the final of a Grand Slam tournament.

Comments
Topics mentioned in this article
Petra Kvitova Tennis
Get the latest updates on India vs England Series, India vs England , live score and IPL 2021 Auction . Like us on Facebook or follow us on Twitter for more sports updates. You can also download the NDTV Cricket app for Android or iOS.