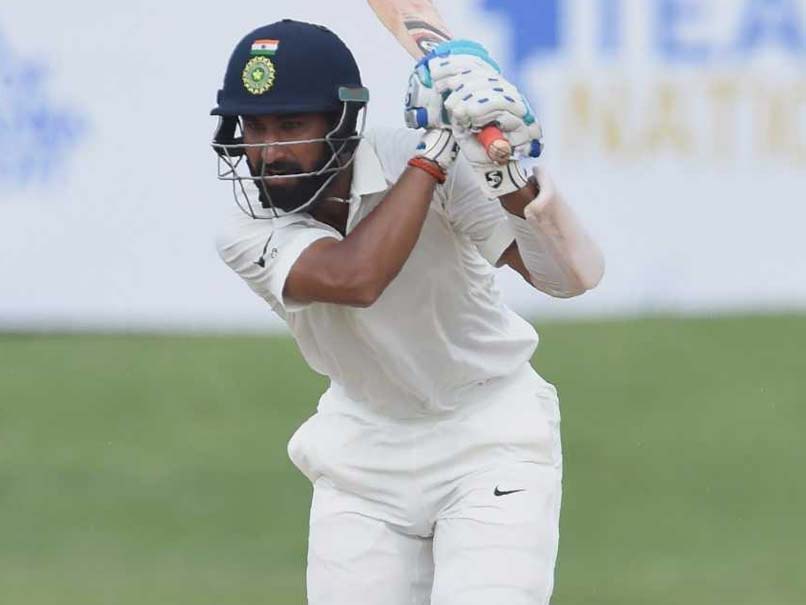 Cheteshwar Pujara and Ajinkya Rahane scored unbeaten centuries to steady India's innings after Sri Lanka jolted the visitors with two crucial strikes on the opening day of the second Test at the Sinhalese Sports Club in Colombo on Thursday. India, who lead the three-match series 1-0, were well placed at 344 for three at stumps after winning the toss and opting to bat in Colombo. Pujara (128), playing his 50th Test, was batting alongside Ajinkya Rahane (103). The pair put on an unbroken 211-run stand for the fourth wicket after the hosts lost opener Lokesh Rahul for 57 and skipper Virat Kohli for 13 early in the second session. (SCORECARD)

16:57 IST:A huge LBWappeal from Rangana Herath. Umpire has given OUT. Wait. Rahane has asked for a review. Replay shows there's an inside edge. It's NOT OUT.

16:38 IST: FOUR! Ajinkya Rahane waits till the end and slaps the ball towards mid-wicket. Excellent shot from the right-hander. Rahane moves to 95 with this shot.

16:36 IST: Ajinkya Rahane moves to 91 with a single off Rangana Herath towards sweeper cover.

16:34 IST: Pushpakumara to bowl remaining deliveries of his over.

16:32 IST: Nuwan Pradeep walking backing to the pavilion. He seems to be in some sort of discomfort. He is the only pacer Sri Lanka playing in this Test.

A 13th Test century to Cheteshwar Pujara. What a way to celebrate your 50th Test! #SLvIndhttps://t.co/82pbpnXWhW pic.twitter.com/LtHOJeFLjK

Cheteshwar Pujara 7th Indian to make a century in 50th Test
Sunny Gavaskar has the highest score: 221 at the Oval 1979#SLvInd

15:36 IST: Cheteshwar Pujara moves to 98 with a couple towards deep backward point.

15:25 IST: FOUR! Half volley from Nuwan Pradeep. Ajinkya Rahane leans forward and drives towards covers  for a boundary. India 259/3 in 65 overs.

15:03: Welcome back! Final session is underway.

Time for the final session as Pujara and Rahane walk out to the middle #TeamIndia #SLvIND pic.twitter.com/mHn00hQXVV

14:39 IST:A loud LBW appeal from Nuwan Pradeep. Umpire is not interested. Skipper Dinesh Chandimal has asked for a review. The impact is outside off. So, the decision will remain same. Great decision from umpire.

14:24 IST: FOUR! Another beauty from Cheteshwar Pujara. He picks the ball nicely and sends it towards extra cover region. India 225/3 in 54 overs.

14:21 IST: FOUR! Excellent placement from Cheteshwar Pujara. He waits till the end and cuts the ball towards backward point. India 219/3 in 53.3 overs.

Congratulations to Cheteshwar Pujara on reaching 4,000 Test runs, brought up in his 50th Test #SLvInd pic.twitter.com/Kkzx5KFSds

13:32 IST: FOUR! That's a trademark Rahane shot. The right-hander goes on back-foot and whips the ball towards mid-wicket.

13:25 IST: Ajinkya Rahane is the new batsman at the crease.

13:15 IST: FOUR!Just a mere push from Virat Kohli and the ball races towards extra cover.

12:54 IST: Captain Virat Kohli is the new man at the crease.

12:40 IST: Welcome back! KL Rahul and Cheteshwar Pujara are making their way to the middle. Rangana Herath to kick-start the second session.

11:54 IST: A huge stumping appeal from wicket-keeper Niroshan Dickwella. He is confident and celebrating with his team. Umpire has asked for a reply. NOT OUT is the call.

11:42 IST: Deep point comes inside the ring for Pujara.

11:19 IST: FOUR! KL Rahul goes on back-foot and slaps the ball towards deep mid wicket. Powerful shot from the right-hander. India 84/1 in 18 overs.

11:12 IST: FOUR! Excellent shot from KL Rahul. The right-hander comes down the track and sends the ball towards deep extra cover for a boundary. India 74/1 in 15.2 overs.

11:10 IST: FOUR! Cheteshwar Pujara comes down the track and smashes the ball towards long on for a boundary. India 70/1 in 14.5 overs.

11:08 IST: Cheteshwar Pujara plays this towards square of the wicket. He will get 2 runs.

10:51 IST: Cheteshwar Pujara is the new batman at the crease. This is his 50th Testmatch.

10:48 IST: WICKET!A loud LBWappeal from Dilruwan Perera. Umpire is not interested. Sri Lanka have asked for a review. It is pitching in line, And, it's OUT. Shikhar Dhawan departs for 35 runs. India lose their first wicket. India 56/1 in 10.1 overs.

10:40 IST: A loud LBW appeal from Dimuth Karunaratne. Umpire has given OUT.Wait! Rahul has asked for a review. And, it's NOT OUT.Umpire has to reverse his decision. India 52/0 in 9.1 overs.

10:25 IST: FOUR! KL Rahul stuns mid-wicket firleder and manages to get another boundary. Great use of fit from the right-hander. India 32/ in 6 overs.

10:19 IST: FOUR! Shikhar Dhawan waits till the end and plays a pull shot towards backward square leg. Third boundary for him. India 22/0 in 4.4 overs.

10:11 IST: FOUR! Short and outside the off-stump from Nuwan Pradeep. Shikhar Dhawan goes on back-foot and smashes Pradeep towards backward point. India 18/0 in 3 overs.

10:07 IST: Dhawan gets an edge and the first slip misses the chance. Sri Lanka missed out on second chance to dismiss Dhawan.

10:06 IST: Rangana Herath starts the proceedings from the other end.

10:04 IST: FOUR! Dhawan gets an outside edge and the ball races towards third man.

09:57 IST: Indian openers Shikhar Dhawan and KL Rahul are making their way to the middle. Sri Lanka team are in a huddle.

09:31 IST: Both the captains are in the middle for the toss.

09:26 IST: Cheteshwar Pujara will be playing his 50th Test today. Big moment for the right-hander.

09:20 IST: Hello and welcome to the Live coverage from the opening day of 2nd Test between India and Sri Lanka in Colombo.

Sri Lanka, on the other hand, would look to be more competitive and with Dinesh Chandimal back in the team, it will only go on to strengthen their batting. The hosts boast a mixed record against India at this particular ground, with eight Tests between the two countries yielding four draws. Both teams have won two matches each, with India winning the last encounter here in 2015 by 117 runs.

Listen to the latest songs, only on JioSaavn.com
Comments
Topics mentioned in this article
India Cricket Team Sri Lanka Cricket Team Cricket Sinhalese Sports Club, Colombo Sri Lanka vs India 2017 Live Score Live Cricket Score Live Blogs
Get the latest updates on IPL Auction 2023 and check out  IPL 2023 and Live Cricket Score. Like us on Facebook or follow us on Twitter for more sports updates. You can also download the NDTV Cricket app for Android or iOS.