Pace spearhead Nuwan Pradeep has injured his hamstring and is thus ruled out of the ongoing Test series. 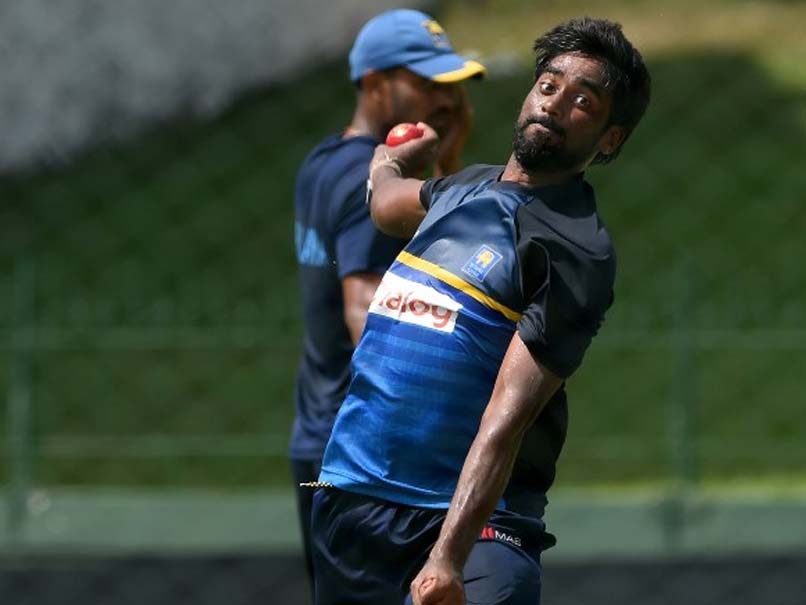 In a massive blow to Sri Lanka, pace spearhead Nuwan Pradeep was on Friday ruled out of the ongoing Test series against India due to a hamstring injury, leaving the hosts with just one medium pacer in the second match. Pradeep, who had taken six wickets in the opening Test, had bowled only four balls with the second new ball on Thursday and did not take field on Day 2. The fresh injury blow to the hosts means that they have services of just one medium pacer, Dimuth Karunaratne, in the ongoing second Test.

"Nuwan Pradeep's out for one or two months," Karunaratne said at the press-conference after second day's play.

"I started my career as a bowler, not as a batsman, so I can bowl. The thing is there are a lot of bowlers who can bowl faster than 130-135," he said. "We played only with one pace option, so when they asked me if we need to bowl a few overs with the new ball, I said I could. That's why I bowled a few overs with Chaminda Vaas to see how it goes."

Pradeep could bowl only 17 overs on the opening day. He had left the field complaining of a hamstring niggle.

Sri Lanka is already going through a tough phase due to injuries to their key players. All-rounder Asela Gunaratne was ruled out of the three-match series after he broke his thumb in the Galle Test.

Skipper Dinesh Chandimal also missed the opening Test due to pneumonia and returned for the second Test only after getting a special exemption from the ICC to use his inhaler.

India had defeated Sri Lanka by 304 runs in the first Test.

Comments
Topics mentioned in this article
India Cricket Team Sri Lanka Cricket Team Nuwan Pradeep Sri Lanka vs India 2017 Cricket
Get the latest updates on Fifa Worldcup 2022 and check out  Fifa World Cup Schedule, Stats and Live Cricket Score. Like us on Facebook or follow us on Twitter for more sports updates. You can also download the NDTV Cricket app for Android or iOS.