India vs South Africa 1st Test: Jasprit Bumrah was in top form and took two wickets on Day 4 to leave South Africa reeling at 94 for four. 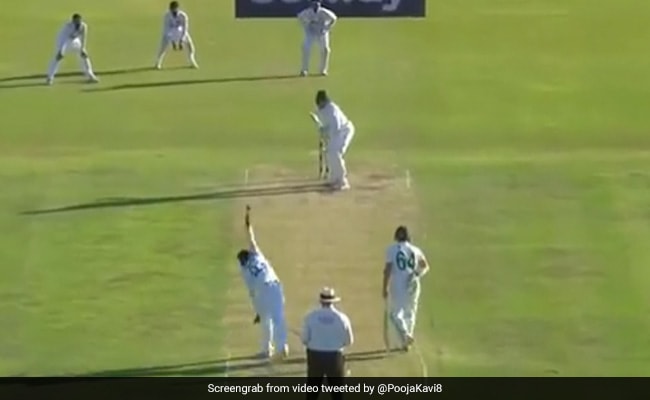 Jasprit Bumrah was in top form on Day 4 of the ongoing first Test match against South Africa in Centurion as he bagged two wickets with sensational deliveries. The Proteas were left reeling at 94 for four and needing 211 runs on Day 5, with Dean Elgar (52) holding fort at one end. The hosts once again had a top-order collapse with Mohammed Shami taking the wicket of Aiden Markram before Mohammed Siraj removed Keegan Petersen. Meanwhile, Bumrah registered the dismissals of Rassie van der Dussen and Keshav Maharaj. His first dismissal of the innings took place in the 37th over with van der Dussen on the crease. Receiving a good length delivery, the batter tried to evade it but the ball ended up moving in sharply to hit his off stump. Van der Dussen could only register 11 runs off 65 balls.

The Ball of the Year for me

BCCI should give boom his IPL salary & shouldn't let him play in it.
Keep him injury free & use him only in important series' & cups

His second dismissal took place in the final delivery of the day. The 28-year-old sent a fantastic yorker on leg, which came angling in from outside off. Maharaj was aimless in his reaction and saw the ball go past him and hit the stumps. Maharaj, who was sent in as the nightwatchman by the hosts, could only muster eight runs off 19 balls.

Here is the video of Jasprit Bumrah's yorker to Keshav Maharaj

What a ball, What a yorker, 143 kph and cleans up Maharaj. Bumrah is the King. pic.twitter.com/ityH4HANOB

Other than his two wickets on Day 4, Bumrah had also registered two dismissals during South Africa's first innings. The Indian bowling department will be hoping to keep up the pressure and prevent South Africa from gathering any momentum on Day 5.

Rassie van der Dussen South Africa vs India 2021/22 Cricket
Get the latest updates on ICC Women's Cricket World Cup 2022 and IPL 2022, check out the Schedule , Live Score and IPL Points Table. Like us on Facebook or follow us on Twitter for more sports updates. You can also download the NDTV Cricket app for Android or iOS.