India's Tour of South Africa: Ahead of the first Test match, net bowler Deepak Chahar tested Indian batters with the red ball during a training session. 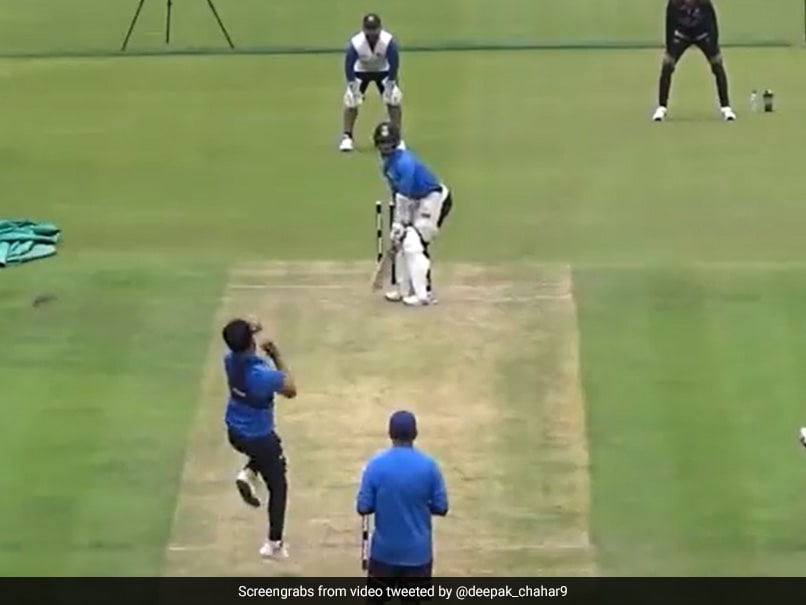 Deepak Chahar, who has been picked as a standby bowler, tried his skills with the red balls in the nets ahead of India's first Test match vs South Africa. The pacer took to social media to share some highlights from the session and impressed fans with his control and swing. The 29-year-old caught the attention of fans with some good deliveries which made it difficult for the batters - Wriddhiman Saha and Priyank Panchal. Also adding that he enjoyed the session, Chahar captioned the video as, "Red ball is fun".

The video was well-received by fans, with one pointing out that "pitches outside asia are more helpful to pacers".

The user commented, "definately not in subcontinent. As pitches outside asia are more helpful to pacers".

definately not in subcontinent . As pitches outside asia are more helpful to pacers

"Deepak is India's best Swing bowler after bhuvi.. and I sure he will give best performance when Play test cricket", another fan wrote.

Deepak is India's best Swing bowler after bhuvi.. and I sure he will give best performance when Play test cricket

Chahar, who is yet to make his Test debut for India, is known for his control and ability to swing the ball bothways. He along with Navdeep Saini, Saurabh Kumar, and Arzan Nagwasalla are with the Indian side as standby players.

India are currently in South Africa and the first fixture of the three-match Test series is scheduled to begin on Sunday.

Star opener Rohit Sharma won't be available for the Test series due to a left hamstring injury. Panchal was called-up as his replacement.

All eyes will be on India's pace department which consists of Umesh Yadav, Shardul Thakur, Mohammed Siraj, Mohammed Shami, Jasprit Bumrah and Ishant Sharma. Their performance could be a deciding factor for the Test series for India.

After the first match, the second and third fixtures are scheduled to begin from January 3 and January 11 respectively.

The Test series will be followed by a three-match ODI series, starting from January 19.

South Africa Cricket Team Deepak Chahar South Africa vs India 2021/22 South Africa vs India, 1st Test Cricket Social
Get the latest updates on ICC Women's Cricket World Cup 2022 and IPL 2022, check out the Schedule , Live Score and IPL Points Table. Like us on Facebook or follow us on Twitter for more sports updates. You can also download the NDTV Cricket app for Android or iOS.