Ngidi was playing on his home ground and was cheered by the audience throughout the game. 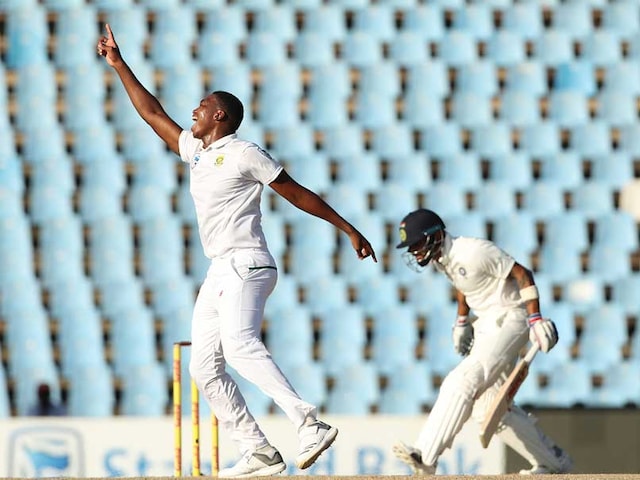 South African pacer Lungi Ngidi on Wednesday received accolades from the cricketing fraternity for his wonderful performance with the ball which helped his team register a 135-run victory over India at Centurion. Ngidi, who trapped India captain Virat Kohli in front of the wicket during the last session of day four's play, said that dismissing one of the world's best batsmen leg before wicket (LBW) was a special moment for him. The Test debutant ended with figures of six for 39 on day five as India were bowled out for 151 and lost the series 2-0.

"The moment for me I think was the captain's wicket. That was a very special moment and I felt that I had worked hard and sort of figured out a gameplan of bowling towards him. So finally getting that really did mean a lot to me," Ngidi said after winning the man of the match award for taking 7 wickets for 90 runs in the second Test.

Ngidi was playing on his home ground and was cheered by the audience throughout the game.

"To be honest, it's actually difficult to describe. It's not something I'm used to, so every time it really does hit me. You get goosebumps and get nervous all over again. It really is an honour to have people appreciate the work that you're doing out there, so it's hard to describe but it really is a blessing," he said.

"I do remember that moment and it did strike me when I was thrown the ball and he was bowling at the other end. During the game I couldn't say anything, I had to internalise it, but it really was a dream come true to bowl with him. It has been a dream of mine," Ngidi recalled.

"He actually has a lot of knowledge for a youngster as well. He is no.1 in the world and it shows. We had been chatting throughout the innings and he had been giving me an idea, and to see them work is special as well," said Ngidi.

"I'd love this to be a long career. I know many people talk about how injuries have affected me in the past, but I feel like this is a new start. In the past, I didn't know what I was doing, to be honest.

"Now I've sort of found my feet and I know which path I'm going down as a cricketer. I'd also like it to be one of the long careers and maybe go down on the honours board," Ngidi said.

"I actually watched a lot of Andre Nel and was convinced that I had the same bowling action as him, but I realise now that isn't true. Nel, Makhaya Ntini, Dale Steyn, those were my idols that I looked up to," he signed off.

Comments
Topics mentioned in this article
India Cricket Team South Africa Cricket Team Lungi Ngidi Virat Kohli South Africa vs India 2018 Cricket
Get the latest Cricket news, check out the India cricket schedule, Cricket live score . Like us on Facebook or follow us on Twitter for more sports updates. You can also download the NDTV Cricket app for Android or iOS.