India were in deep trouble at 28 for 3 after bowlers dismissed South Africa for a modest 286 on the opening day of the first Test. 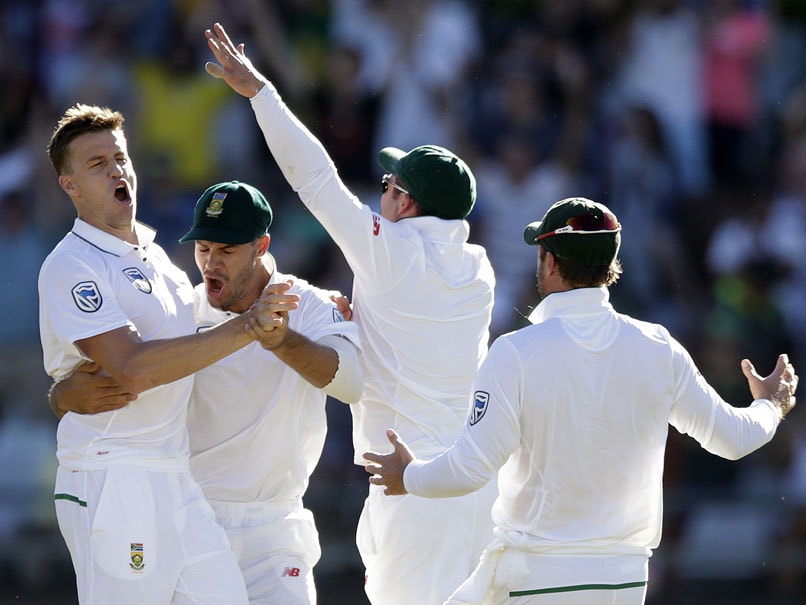 Virat Kohli-led Team India started strongly on the opening day of the first Test against South Africa at Newlands in Cape Town on Friday, but ended the day's play in disarray as their batsmen failed to resist the ferocious onslaught by the home team's fast bowlers. India were in deep trouble at 28 for 3 after bowlers dismissed South Africa for a modest 286 on the opening day. In India's 11 over burst during the final hour, the South African trio of Vernon Philander (1/13), Dale Steyn (1/13) and Morne Morkel (1/0) troubled the Indian top-order with bounce, seam and swing.

Cheteshwar Pujara was batting on 5 with Rohit Sharma (0*) on the other end when umpires called the stumps on the opening day.

Murali Vijay (1) flashed at an away going delivery from Philander while left-hander Shikhar Dhawan (16) found Steyn's pace too hot to handle going for a pullshot on a delivery that climbed on him.

Skipper Virat Kohli (5), who has had serious problems with moving deliveries on the 'fourth stump' found Morkel getting one to rear from back of the length with a shade away movement.

Just like England tour of 2014, Kohli fished at the delivery to find Quinton de Kock gobble up the prize catch.

This was after Indian bowlers led by Bhuvneshwar Kumar (4/87 in 19 overs) had South Africa 286 all out in 73.1 overs -- a total India would consider as 50 too many after the UP seamer had the Proteas reduced to 12 for 3 inside six overs.

It was in the post-tea session where Keshav Maharaj (35) and Kagiso Rabada (26) took their 8th wicket partnership to 37 runs. This helped push South Africa past the 250-mark. Their stand was finally broken when R Ashwin ran out Maharaj in the 63rd over.

Rabada and Dale Steyn (16 not out) then added 22 runs for the ninth wicket frustrating the Indians.

Unable to get rid of the tail quickly, South Africa looked set to cross 300 before Ashwin (2-21) took two quick wickets to dismiss both Rabada and Morne Morkel (2).

South Africa's total was mainly based on contributions from the dangerous pair of AB de Villiers (65) and skipper Faf du Plessis (62), who added a whirlwind 114-run for the fourth wicket to give the visitors an upperhand after the initial debacle.

Debutant Jasprit Bumrah (1/73 in 19overs) and young Hardik Pandya (1/53 in 12 overs) removed the pair in the post lunch session in quick succession.

The dangerous Quinton de Kock (43) was removed by Bhuvneshwar and the Proteas looked uncomfortable despite maintaining a healthy run-rate but never stopped playing shots.

Post lunch, De Villiers and Du Plessis brought up their 100-partnership for the fourth wicket off 134 balls. Bumrah got his maiden scalp in De Villiers as he angled one in which breached the defence of the former skipper after taking an inside edge of his bat.

Three overs later, Pandya made it a double breakthrough as Du Plessis was caught behind. It was payback for the all-rounder, who had trapped the batsman lbw off the previous delivery, only for DRS to overturn the decision on umpire's call.

In between, Du Plessis had completed his 16th Test half-century off 98 balls.

De Kock and Vernon Philander (23) continued with the attacking mode and put on 60 runs off only 54 balls for the sixth wicket.

In doing so, they helped South Africa cross 200 in the 45th over.

Bhuvneshwar returned for his third spell and immediately struck again getting De Kock caught behind.

Before tea, Mohammed Shami (1-43) bowled Philander with a delivery that reversed.

The hosts could have lost another wicket but Shikhar Dhawan dropped Keshav Maharaj (on 0 then) at third slip in the 47th over over of what could have been Bhuvneshwar's fifth scalp.

Bhuvneshwar got India off to a rollicking start as he took three wickets in his first three overs. He had Dean Elgar (0) caught behind off the third ball of the match. An over later, he trapped Aiden Markram (5) lbw with a sharp inswinger.

The ever-dependable Hashim Amla (3) too was caught behind off the Meerut speedster as his first spell figures read 3-1-5-3.

De Villiers then led South Africa's recovery as the duo batted out the remainder of the challenging first hour. They looked to counter attack the bowling with the former taking 17 runs off one Bhuvneshwar over.

In doing so, they brought up the 50-partnership for the 4th wicket off only 63 balls.

There was a chance from Du Plessis off Shami in the 17th over but it bounced just short of skipper Virat Kohli at second slip.

Debutant Bumrah, who was preferred over seasoned Ishant Sharma, came on as first change and purchased awkward bounce at times off the pitch. He troubled both batsmen in his first spell but was unable to make the breakthrough that India desired. Thereafter, De Villiers brought up his 41st Test half-century off only 55 balls, inclusive of 10 fours. The milestone came off a cut shot off Shami's bowling.