Virat Kohli wants the Indian players to cash on the opportunities in the run up to the World Cup, which is 15 months away. 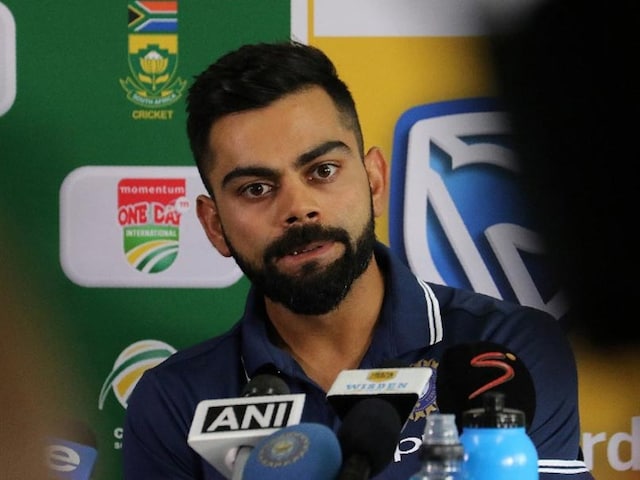 India are scheduled to play the first ODI against South Africa at Kingsmead, Durban© AFP

Virat Kohli wants the Indian players to cash in on the opportunities in the upcoming ODI series against South Africa in run up to the World Cup, which is 15 months away. The India skipper believes that the core team for the 50-over World Cup is more or less sorted, barring No.4 slot and thinks that Ajinkya Rahane is a strong candidate for the position considering the conditions in England. Ahead of the 1st ODI in Durban, the Indian team had an optional practice session on Wednesday, with Kohli and pace bowlers taking a day off.

"I had said earlier that Ajinkya Rahane would be looked at as a third opener but that situation can change because he has batted at No. 4 in a World Cup (in 2015) before. These conditions are such that you get to play fast bowling throughout the innings so he becomes a strong candidate for No. 4.

"Other than him we have Shreyas Iyer and Manish Pandey.

We don't want to be one-dimensional. It depends whose technique is more suited to what spot especially in that particular country. All options are open," he said further.

The rest of the batting order is more or less sorted, said Kohli.

"Although the lower middle order is more or less sorted, the middle order is something we are still looking at. The combination is working well for us with Hardik Pandya, Kedar Jadhav and MS Dhoni rotating and batting together.

"No. 4 is something we have experimented with in the last couple of series. That is the only spot I can see that needs to be solidified otherwise the team looks pretty balanced, he added.

Kohli stressed that although the core group of players has been identified already, things could still change in the lead-up to the World Cup.

He also added that there is a need to find balance between preparations and the challenge of current series.

"It s about who takes that one particular spot (number four). It's not even spots above and below. Guys who are given the opportunity need to capitalise and really string in performances that convince the management and the team very soon that that guy is meant to play at that spot for the team.

"I feel the core of players is more or less pretty strong at the moment. Obviously changes can happen at any stage. You don't know whether someone is going to be in form or not or what the team requires at certain stages," he said.

Kohli said that the squad has enough quality even if there is some experimentation to be done.

"It is about finding players who fit a particular spot better in certain conditions. That will be our mindset. We will play the World Cup in England, which will be very different to what we get in India.

"People who might be doing well at home might not necessarily repeat their performances in England. It s very different. We will have to figure out which players game suits the team best in particular conditions that we play, at a particular spot.

"I don t think the quality of the team will be compromised in any way regardless of who takes the No.4 position because we have strong batsmen above and below to stabilise the innings," said the skipper.

Talking about the series in question, the Indian skipper said that this would be a tough assignment for India's leg- spinners who are playing in foreign conditions for the first time.

"We are one of the few teams, or probably the only team in world cricket, to be blessed with two wristspinners, while Kedar Jadhav is doing the conventional job pretty well for the team. Wrist-spinners help you in any conditions in the world.

"Wrist-spinners can go for six an over but they will pick you three wickets as well, which is eventually the difference in the game, said Kohli.

"We obviously want to win every series that we play.

Thinking of records or doing something that hasn't been done before is not something you think of before achieving it. It just adds extra pressure, which is not needed.

"But yes, we took a lot of confidence from that last Test. As batsmen obviously, everyone is looking forward to stepping up. Like in the last Test how we believed in ourselves and ended up winning the Test. We have to carry the same belief throughout this series."

Kohli expects the pitches to be much more batting friendly in ODIs that what was seen in the Test series.

"The wickets are going to be much better than the Test series, because of the format and this pitch looks pretty balanced I would say for a good game of cricket."

Kohli was asked about the various differences between leading in Test and ODI cricket, after being named captain in ICC s annual teams in both formats. The skipper said that there is a great bunch of players available to the team management at the moment.

"In ODI cricket you have to think more, at every moment.

In Test cricket, the game has a pattern, and it goes with a flow and a speed. So, you can figure out in which session when the momentum shifts. But in ODI cricket it can be over to over. So you have to always stay ahead of the game.

"One advantage as a batsman is I can think like one and figure out what must be going through their minds. You have to be on top of the game and do things proactively first rather than later."

Before picking a player, the character is given more importance than skills, said Kohli.

"For us as team management, and myself, we look at characters before we look at skill. We look at a guy who scored 40 when the team needed it the most. Compared to a guy who has scored runs but they might not have affected the state of the game that much.

Comments
Topics mentioned in this article
India Cricket Team South Africa Cricket Team Virat Kohli Ajinkya Rahane Faf du Plessis Kingsmead, Durban South Africa vs India 2018 Cricket
Get the latest updates on IPL 2020, check out the IPL Schedule for 2020 and Indian Premier League (IPL) Cricket live score . Like us on Facebook or follow us on Twitter for more sports updates. You can also download the NDTV Cricket app for Android or iOS.