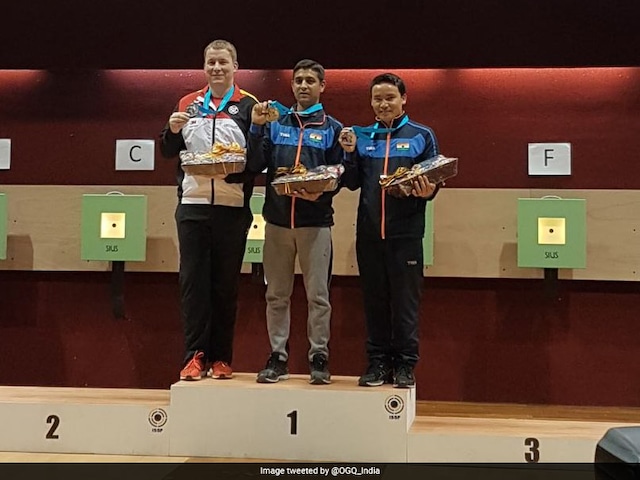 Unheralded Indian shooter Shahzar Rizvi clinched the gold medal with a world record score in a memorable maiden ISSF World Cup appearance, while Jitu Rai and Mehuli Ghosh bagged a bronze each in Guadalajara, Mexico. The Meerut-based Rizvi shot a world record 242.3 in the 10m air pistol event's final to beat reigning Olympic champion Christian Reitz of Germany, 239.7, to win the top prize. Pistol ace Jitu Rai won the bronze in the event with a score of 219, as three Indians made it to the finals of the season's first World Cup.

Om Prakash Mitharval, the other Indian shooter in the event, finished at creditable fourth position with a score of 198.4 points.

In this women's event too, three Indian shooters progressed to the final.

Anjum Moudgil finished in fourth position with 208.6 points, while Apurvi Chandela was seventh in the standings with 144.1 points.

India had a fruitful opening day in the competition as they won three medals - a gold and two bronze.

Shahzar finished second in the qualifying, behind Reitz, shooting 579 to the German's 588 after 60-shots.

Rai was one behind Shahzar with 578, while Om Prakash shot 576 to qualify in fourth place.

While Jitu and Om Prakash maintained their positions at the end of the finals, Shahzar turned the tables on Reitz in style, staying ahead of the classy German throughout the length of the 24-shot final.

In the women s 10m air rifle final, Mehuli and Anjum were in medal contention from the beginning, and after a sea-saw battle between the two a 9.9 on the 17th shot meant Anjum ended in fourth position with a score of 208.6.

Romania s Laura Georgeta Coman, who won gold in the Munich World Cup last year and a silver at the World Cup Finals, came up with a classy display, leading throughout to win the gold medal with 251.5.