Elavenil Valarivan defended her gold medal in the Junior World Cup as she beat compatriot Mehuli Ghosh (630.4) by 1.4 points in the women's air rifle final on Monday. 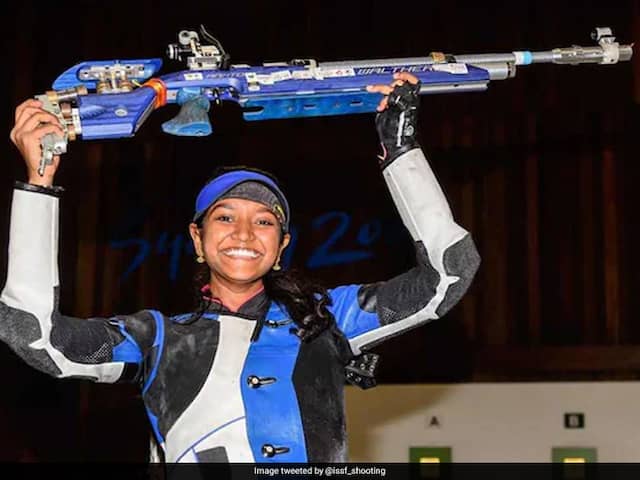 Elavenil Valarivan defended her gold medal in the junior World Cup as she beat compatriot Mehuli Ghosh (630.4) by 1.4 points in the women's air rifle final on Monday. Elavenil shot 251.6 in the final to beat qualification topper Mehuli. Elavenil did not fare well in the qualification round, making the grade in the eighth place for the final in a strong field of 124 shooters. Oceanne Marianne Muller of France won the bronze. Elavenil and Mehuli, along with Shreya Agrawal who shot 625.4, clinched the team gold with a junior world record score of 1883.3, as India finished on top of the medals tally with six gold, six silver and two bronze medals.

Russia and Norway had two gold medals each, while China, Austria, Thailand and Germany had won one gold apiece.

Bhowneesh Mendiratta shot 116 and missed the final by three points in the junior men's trap event.

Besides her individual podium finish, Elavenil also combined with Shreya Agrawal and Zeena Khitta to claim the team gold medal.

The 18-year-old Elavenil, competing in her second World Cup and first final, shot 249.8 in the women's final to claim the top individual honours. Her 631.4 in the qualification was a new world record.