In the viral video, the dog plays the role of setter perfectly in a game of two-a-side volleyball. 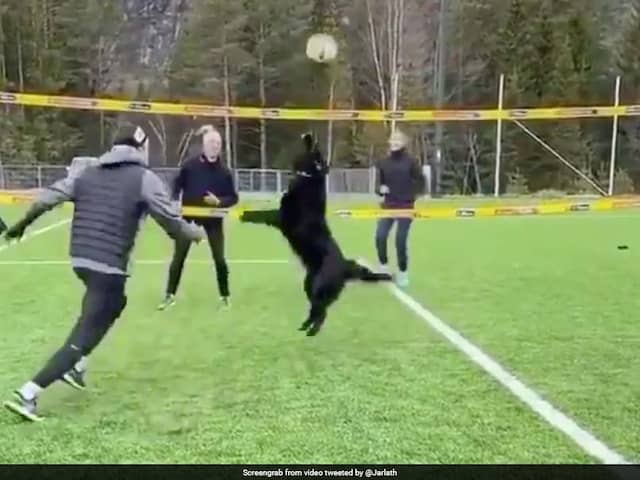 With all sporting action almost at a complete standstill due to the coronavirus pandemic, social media has become the new playground for professionals and fans alike. From fitness drills to trick shots, some sports stars have become quite active on platforms like Twitter, and that has been reciprocated by fans who have put out unique videos of their own for the world to see. Trick shot and juggling videos have been some of the most popular ones on social media but one video of a dog playing volleyball is threatening to trump them all.

In the video, a two-a-side volleyball game is being played on what seems a football pitch. Two women are in one team while a man is being partnered by a dog.

Incredibly, the dog plays the role of the perfect setter for his partner in the video that has gone viral on Twitter.

The video posted by Jarlath Regan, liked by former England cricketer James Taylor, garnered over 6K retweets and over 30K likes on Twitter with more than 400 comments on the post.

Don't send me another video via WhatsApp unless it's this good. pic.twitter.com/u8clZJ8qoV

The coronavirus pandemic has decimated the 2020 sporting calendar, with the Tokyo Olympics and football's European Championship the biggest events to be postponed, while Wimbledon was cancelled for the first time since World War II.

The historic decision to postpone the summer Olympics by 12 months was taken late March amid the ongoing coronavirus pandemic. It was the first peacetime postponement of the Games.

The organisers said that the Tokyo Games will begin on July 23 next year.

In a statement, the IOC said the new dates would give health authorities and organisers "the maximum time to deal with the constantly changing landscape and the disruption caused by the COVID-19 pandemic."

The decision would also cause "minimum" disruption to the international sports calendar, the body said.

Comments
Topics mentioned in this article
Volleyball Other Sports
Get the latest Cricket news, check out the India cricket schedule, Cricket live score . Like us on Facebook or follow us on Twitter for more sports updates. You can also download the NDTV Cricket app for Android or iOS.