Moto2 rider Romano Fenati shockingly pulled his rival Stefano Manzi's brake lever while riding at a speed of over 200kph. 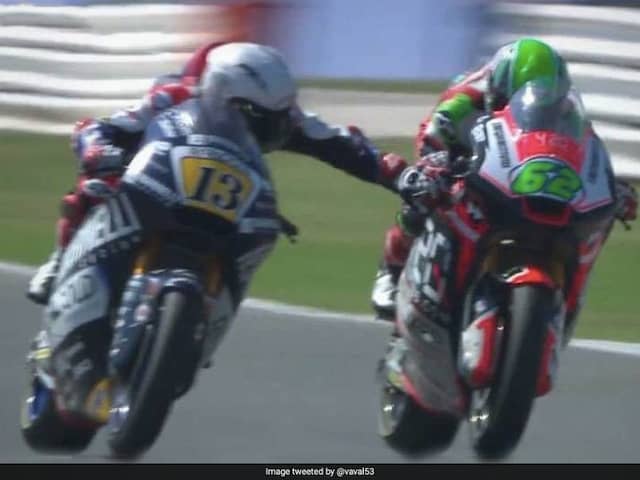 Romano Fenati was sacked by his team and banned for two races.© Twitter

The MotoGP has seen its fair share of controversies over the years but none so incredible as the one that took place during a Moto2 race at the San Marino on Sunday. Romano Fenati, a Moto2 rookie this year aboard a Marinelli Snipers-run Kalex bike, pulled his rival Stefano Manzi's front brake while racing at 220kph. Manzi momentarily lost his balance but managed to bring his bike under control. Fenati was immediately black-flagged and disqualified after 23 laps and was later banned for two races by the FIM MotoGP panel. Fenati was also sacked by his team who confirmed they were severing his contract "for his unsporting, dangerous and damaging conduct for the image of all".

The stewards panel announced that Fenati would miss the next two races in Aragon, Spain on September 23 and Thailand on October 7 for having "deliberately attempted to cause danger to another rider".

"Riders must ride in a responsible manner which does not cause danger to other competitors or participants, either on the track or in the pit lane," the FIM said in a statement.

A few laps before the shocking incident, Manzi and Fenati made contact after the former overtook on the inside. Both riders ran off the track and dropped down the order.

On Monday, Fenati apologised for his "impulsive" behaviour.

"I apologise to the world of sport. This morning, with a lucid mind, I wish it had just been a bad dream," Fenati said in a statement.

"I made a disgraceful gesture, I was not a man! A man would have finished the race and then he would have gone to race direction to try and get some justice for the preceding incident.

"I shouldn't have reacted to provocation," continued Fenati.

"A horrible image of me and of the sport has come out. I'm not like that, people who know me well know that!

"In my career, I've always been a fair rider. Last year I was one of the few who was not penalised, I have never put someone else's life in jeopardy, on the contrary, I have always maintained that there are riders on the track who are dangerous because of their riding style."

Italy's Francesco Bagnaia, of Kalex, won the Moto2 category race in Misano on Sunday ahead of Miguel Oliveira of KTM, to extend his lead over the Portuguese rider to eight points in the overall standings.