In Mexico, where the masked stars of "lucha libre" wrestling are already cultural icons, people are using their colorful masks to ward off the coronavirus in style. 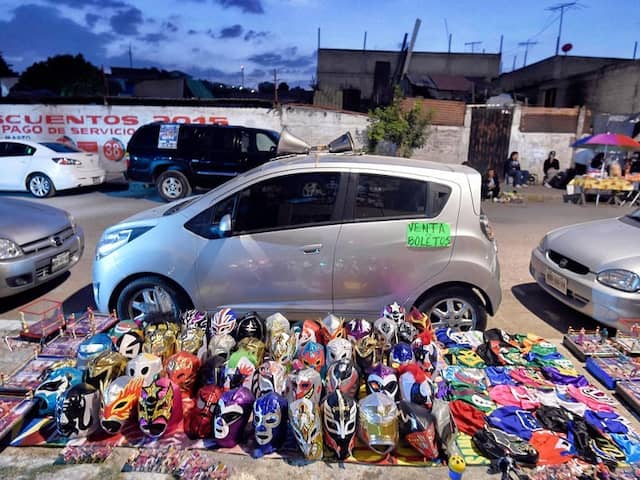 The wrestling masks, fitted out with an added chin strap, are highly sought after in Mexico.© AFP

All around the world, the coronavirus pandemic has left people scrambling for protective face coverings. But in Mexico, where the masked stars of "lucha libre" wrestling are already cultural icons, people are using their colorful masks to ward off the disease in style. The wrestling masks, fitted out with an added chin strap, are highly sought after since they cover both the nose and the mouth of the wearer, and hundreds have been sold since the outbreak began. The handmade masks use the same colors and designs worn by the most famous wrestling stars and are produced by a 53-year-old former wrestler, Jose Isaias Huerta, known in his days in the ring as "The Grey Cat."

In less than a month, Huerta has sold 600 masks, churning out 30 a day -- and he has a backlog of orders that will take more than a month to fulfill.

"Mexicans have lucha libre in their blood -- the wrestler is a living hero for the fans," he told AFP.

"I see that with this," he added, pointing at his masks.

The emblematic masks of stars such as El Santo, Blue Demon or Parka have been recreated using regular fabrics, and the maker does not claim they have the protective quality of actual surgical masks.

Huerta sells them for 50 pesos (around $2) apiece -- almost 10 times the price of a conventional mask sold in packets of 10 in pharmacies, which are not as thick as his.

Huerta made his amateur debut in the wrestling ring at age 11 and had his first professional bout when he was 14. Since then, he has never strayed far from the canvas.

After retiring, he got his hands on a couple of old sewing machines and started turning out –- together with his sister –- masks for both professional wrestlers and their fans.

They sold well at the gates to the lucha libre arenas, given the widespread homegrown fan base and the curiosity of tourists looking for souvenirs.

But several weeks ago, all wrestling matches were suspended as part of the effort to curb the spread of the coronavirus, which left vendors and producers facing bankruptcy.

But then Huerta stumbled on the idea of selling the masks as protective face gear.

The inspiration came by chance, when he gave a mask to his eight-year-old grandson –- also a big fan of the sport.

That was when his son-in-law noticed how useful and attractive the mask could be for Mexicans facing the airborne virus.

Cristobal Lobato, a fan of the "tough guys" strain of lucha libre wrestling, whose adherents flout the rules and are craftier in the ring, was one of the first to buy in.

"I saw them on the internet and hunted until I found out where to buy them," said the digital strategist who bought 10 masks to give to family members, especially the kids.

"They don't really understand what is going on and putting on the mask of a luchador makes them feel like superheroes, while it also protects them," he said.

The walls of Huerta's poorly lit workshop, where he works furiously to meet his orders, are covered with old newspaper cuttings and photos of him in his glory days as The Grey Cat.

His newfound success came suddenly, when a local radio station in Puebla -- 120 kilometers (75 miles) to the south of Mexico City -- mentioned his masks and triggered a surge of interest.

Huerta has quickly cobbled together a crew of six friends and family members to churn out masks for as long as demand lasts.

Every day, they have to figure out how to send packages to far-flung parts of the country, like prosperous Monterrey in the north.

Having no experience of servicing nationwide demand, they have even had to ask their new clients if they know how much it costs to send packages across the country.

The first masks were made with leftover fabric, and acquiring new material has been difficult because of the national lockdown and the closure of stores.

His passion for the wrestling craft has been key to the success of his business.

"We know they're made-up -- Santo, Blue Demon -- but we carry on watching them and say, 'These are our idols,' and they are the ones that sell the most," he said.