A Belgian cyclist died Sunday after crashing during the one-day Paris-Roubaix race in northern France. 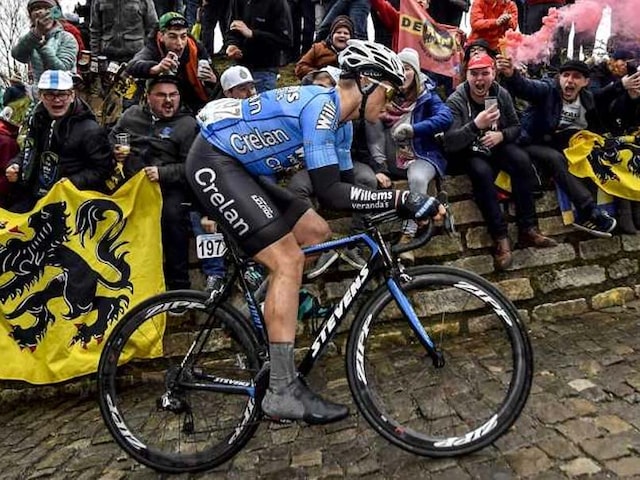 Michael Goolaerts suffered a cardiac arrest and was airlifted to a hospital in France.© AFP

Michael Goolaerts, a 23-year-old cyclist with Veranda's Willems-Crelan team, suffered cardiac arrest and was airlifted to a hospital in Lille, France, where he died "of cardiac arrest," the team said in a statement, adding that he was "in the presence of his family members and loved ones." He crashed about halfway through the 257-kilometer race on the second section of cobbles and was unconscious, according to the BBC. Video from the scene appeared to show him receiving CPR from medics at the scene.

The team planned "no further communication as we want to give his close ones time to deal with this terrible loss."

The race, which is called the "Hell of the North" and goes from north of Paris to Roubaix, consists of 29 cobbled sections. It covers rugged terrain, with cyclists using special bike frames and tires. Flats and mechanical problems often occur.

Goolaerts, who was in his fourth season with Veranda's Willems-Crelan, spent 2013 and 2014 with them at the continental level, and returned in 2017 after a season as a trainee with Belgian World Tour team Lotto-Soudal. That year, he won the opening stage of the 2016 Tour du Loir-et-Cher on the UCI Europe Tour. He rode several of the cobbled classics and semi-classics this season. He was riding in his first Paris-Roubaix race for senior competitors after riding in the under-23 version three years ago.

David Lappartient, president of cycling's world governing body the UCI, said in a statement: "On behalf of the UCI and the cycling family as a whole, I would like to extend my deepest condolences to the family, team and loved ones of Michael Goolaerts, who left too early," David Lappartient, the president of cycling world governing body (UCI), said. "We share their immense sadness."