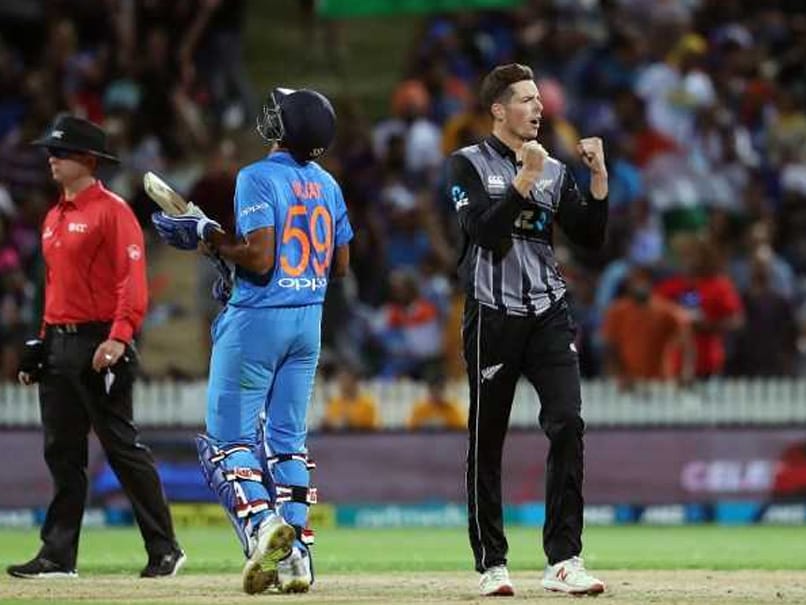 Mitchell Santner and Daryl Mitchell claimed two wickets each as New Zealand defeated India by four runs in the third T20 International in Hamilton to clinch the three-match T20I series 2-1 on Sunday. Scott Kuggeleijn and Blair Tickner chipped in with a wicket each as the home team restricted India to 208/6 in the chase of 213 runs. Vijay Shankar top-scored for India with 43 runs. Earlier, New Zealand exploited batting friendly conditions at a small ground and posted an imposing 212 for four in the series-decider. Opener Colin Munro produced a 40-ball 72 and shared a 80-run stand with fellow opener Tim Seifirt (43) to lay foundation for a big score after India captain Rohit Sharma elected to bowl. Runs came thick and fast as skipper Kane Williamson contributed 27 and Colin de Grandhomme produced a crucial 30-run cameo off 16-balls. Krunal Pandya proved to be the most expensive bowler of the lot as he bled 54 runs in his four-over quota. The left-arm spinner was guilty of bowling full length deliveries, which were easier to attack. (SCORECARD)

16:00 IST: That brings an end to the third T20I between India and New Zealand in Hamilton.Thank you for joining us for the live coverage.

Congratulations to New Zealand on winning the series 2-1 #NZvIND pic.twitter.com/x829ObFkBN

15:54 IST: SIX! But that's on no use now. New Zealand beat India by four runs to clinch the three-match T20I series 2-1. Dinesh Karthik lofts the last ball over extra cover for a six. Mitchell Santner and Daryl Mitchell claimed two wickets each as New Zealand restricted India to 208/6 in the chase of 213 runs.

15:49 IST: SIX! Krunal Pandya makes it a good over for India. 14 runs from the second-last over. It brings up 50-run partnership between Dinesh Karthik and Krunal Pandya.

15:46 IST: SIX! Dinesh Karthik pulls the shortish delivery over the fine leg for maximum. He can be the game-changer for India.

15:39 IST: SIX! Glorious shot. Tim Southee bowls too wide of the off stump and left-hander Southee picks it up for maximum.

15:34 IST: SIX! Exquisite. Blair Tickner bowls a half-volley and Dinesh Karthik picks it over the long-off to score a massive six. India are 159/5 in 16.1 overs.

15:29 IST: WICKET! Daryl Mitchell claims his second wicket to dismiss MS Dhoni for two runs. With the wicket of the wicketkeeper-batsman, New Zealand inch closer to the series win.

15:24 IST: WICKET! Scott Kuggeleijn strikes to help New Zealand tighten the noose on India. Hardik Pandya departs with a flying bat. Kane Williamson is not distracted by that as he takes the dolly.

15:19 IST: WICKET! Daryl Mitchell claims the big wicket. Indian skipper Rohit Sharma departs for 38. With this wicket, New Zealand are back into the contest.

15:14 IST: SIX! Hardik Pandya picks up the short ball over the mid-wicket for maximum. Is he planning similar fireworks that we just saw by Rishabh Pant?

14:59 IST: SIX! 100 up for India. Rishabh Pant predicts the googly and smashes it over long-off for maximum.

14:57 IST: End of the over! Rishabh Pant does his best to spoil a successful over by Mitchell Santner. He scored a four and a six to conclude the over.

14:51 IST: SIX! Vijay Shankar picks this one even higher. Two consecutive sixes take India to 76 for one in 7.5 overs.

14:50 IST: SIX! High quality cricket from Vijay Shankar. He took time, came down on his knees and picked up the leg break over the cover region for maximum.

14:45 IST: Mitchell Santner is back into the attack. He gave New Zealand an early breakthrough with an important wicket of Shikhar Dhawan.

14:42 IST: FOUR! Cracking shot. Rohit Sharma lifts up this one over the long-off for four runs. It takes India past 50 runs in 213-chase.

14:39 IST: FOUR! Excellent use of the feet. Rohit Sharma advances and drives it through the gap for a boundary.

14:34 IST: FOUR! Vijay Shankar smashes it over the short third man to get his third boundary. But Blair Tickner is all smiles.

14:30 IST: FOUR! This time, Vijay Shankar smashes it down the ground to conclude the third over. India are 29/1.

14:28 IST: FOUR! Scott Kuggeleijn bowls on the pads. Vijay Shankar flicks it away comfertably through the fine led for a boundary.

14:24 IST: FOUR! Well controlled shot. Rohit Sharma plays a cut shot and the ball goes down the ground to third man for a boundary.

14:18 IST: WICKET! Daryl Mitchells claims a remarkable catch to dismiss Shikhar Dhawan. Mitchell Santner gets the opener's wicket early. It leaves India reeling at six for one in 0.5 overs.

14:17 IST: FOUR! Shikhar Dhawan gets off to the mark in style. Mitchell Santner bowls a short wide outside off delivery and gets punished by the left-handed Indian opener.

14:16 IST: Rohit Sharma and Shikhar Dhawan are out in the middle to start India's chase of 213 runs. Mitchell Santner to open the attack for New Zealand.

New Zealand post a mammoth total of 212/4 for #TeamIndia to chase.

Will India chase this down or will the Kiwis defend their total? #NZvIND pic.twitter.com/s4ShooR4NU

14:06 IST: FOUR! New Zealand score 212/4 in their allotted 20 overs. Daryl Mitchell pulls a shortish delivery by Khaleel Ahmed away to the mid-wicket region for a boundary. Colin Munro top-scored for the home team with 72 runs, while Kuldeep Yadav claimed two wickets for India.

14:02 IST: SIX! What an incredible shot. Ross Taylor welcomes Khaleel Ahmed in the final over with a huge six.

13:58 IST: WICKET! Bhuvneshwar Kumar strikes to claim his first wicket in Colin de Grandhomme. It leaves New Zealand to 193/4 in 18.2 overs. He scored 30 runs for New Zealand with the help of three boundaries and a six.

13:41 IST: SIX! Colin de Grandhome lifts it up over the mid-wicket to get maximum for his team.

13:31 IST: WICKET! Hardik Pandya finally gets his man, but Kuldeep Yadav will have his second wicket. Colin Munro departs for 72 after being caught by Hardik at deep mid-wicket.

13:28 IST: FOUR! Unlucky Hardik Pandya. And Colin Munro gets another lifeline. Again an outside edge gifts him a boundary.

13:27 IST: SIX! That's massive. Hardik Pandya tries a yorker but Colin Munro lofts it up nicely over the long-on for a huge six.

13:24 IST: FOUR! Kane Williamson gets his first boundary. The outside edge takes the ball quickly through the third man, where Rishabh fails to save a boundary despite an impressive dive.

13:07 IST: Tim Seifert stumped? MS Dhoni has done his work from behind the stumps. Let's see the result.

12:58 IST: SIX! It has already become an expensive over for Krunal Pandya and India. Krunal concedes 18 runs in five balls. It takes New Zealand to 64/0 in 5.5 overs.

12:57 IST: FOUR! Clever shot. Colin Munro smashes through the deep extra cover to get a boundary.

12:49 IST: FOUR! A very skillful shot by Tim Seifert. He pulls it away to the backward square leg for a boundary. It concludes the fourth over, New Zealand are 38 without loss.

12:47 IST: SIX! Wonderful shot. Tim Seifert plays a premeditated sweep shot to guide the ball across the fence at fine leg for maximum.

12:46 IST: FOUR! In the air... But Tim Seifert is safe and gets quick runs for his team. Vijay Shankar misses a stunning catch.

12:45 IST: End of the over! Thanks to the consistent yorkers by Bhuvneshwar Kumar, India are now back on track. Just three runs from the over. New Zealand are 22/0 in 3 overs.

12:37 IST: FOUR! Excellent execution. Tim Seifert waits for the delivery and punches it nicely through the cover region to get his first boundary.

12:34 IST: End of the over! 11 runs from the first over by Bhuvneshwar. New Zealand are off to a confident start in the series decider.

12:32 IST: SIX! Colin Munro gets off to the mark with a 71m six. He lifts a shortish delivery by Bhuvneshwar Kumar over the long-on to get the maximum.

12:30 IST: Tim Seifert and Colin Munro are out in the middle to start New Zealand proceedings. Bhuvneshwar Kumar to open the attack for India.

12:24 IST: "Looks like a pretty good surface. It's important to the job first up. In T20 cricket, to take wickets is really important. We have to assess conditions," Kane Williamson says at the toss.

12:16 IST: "We didn't have a great result the last time we played here. The boys are looking really good. It's a big game - decider. The combination we play with allows us to chase as we bat deep. We have a good record chasing scores in the past," Rohit Sharma says after winning the toss.

Captain @ImRo45 calls it right at the toss and elects to bowl first in the series decider #NZvIND pic.twitter.com/oknkxbex7J

12:00 IST: Time for toss! India win toss, opt to bowl against New Zealand in Hamilton. For India, Kuldeep Yadav comes in place of Yuzvendra Chahal. Blair Tickner is set to make his T20I debut for New Zealand. He replaces Lockie Ferguson in the playing eleven.

11:45 IST: Rohit Sharma is just two sixes away from becoming the highest six-hitter in T20 International cricket. He has 102 sixes to his name, while West Indies' Chris Gayle and Martin Guptill are on top with 103 sixes each.

11:35 IST: Before the start of the men's clash, New Zealand women outclassed India by two runs in the third T20I to sweep the series 3-0. Smriti Mandhana smashed 86 runs but failed to drive her team past the victory line. India were restricted to 159/4 in the chase of 162 runs.

We're back at the Seddon Park for the series decider #NZvIND pic.twitter.com/CJORsbIUa3

11:30 IST: Hello and welcome to our live coverage of the third and final T20I of the three-match series between India and New Zealand in Hamilton.

India played the same XI in the first two games and in all likelihood, will maintain continuity unless there are some niggles.

In case the team management gives change a thought, it could be a like for like replacement with Kuldeep Yadav coming in place of Yuzvendra Chahal as the wrist spinner. However, a look at India's T20 playing XIs will indicate that Chahal has been their preferred shortest format bowler on most occasions.

The Indian bowling unit will look to replicate their good show from the last match where they found their rhythm after a pasting in the opener from Tim Seifert.