The Auckland T20 International was hit by the controversial LBW dismissal of Daryl Mitchell. 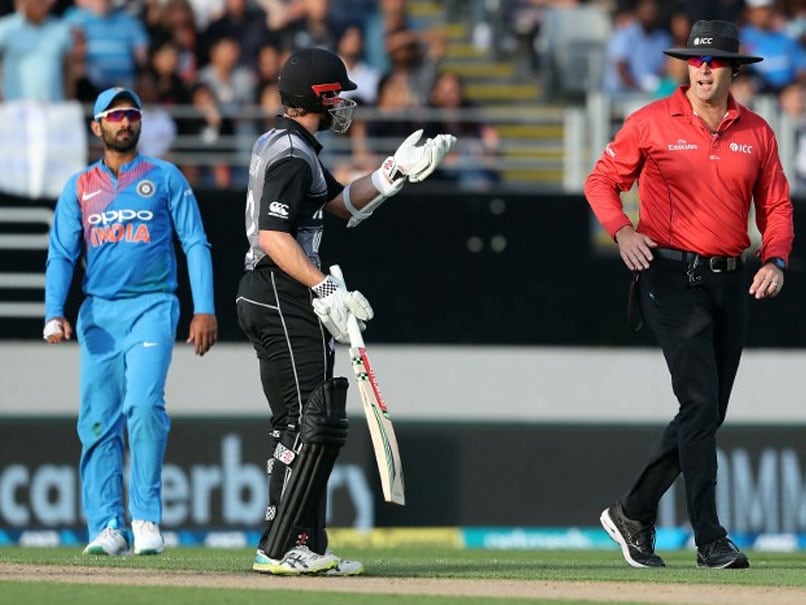 A controversy erupted in Auckland during the second Twenty20 International (T20I) between India and New Zealand with a debatable verdict from the Decision Review System (DRS) causing chaos on Friday. The drama unfolded after Daryl Mitchell was given out LBW to spinner Krunal Pandya. Mitchell quickly reviewed after consultation with captain Kane Williamson, indicating that there was a clear inside edge. The Hotspot technology indicated a mark on Mitchell's bat but there was no spike when the ball passed the bat on Snicko-meter, which indicates all contacts between bat and ball and other surfaces.

He gave Mitchell out on the basis of ball-tracking which was showing that the delivery would have gone on to hit the stumps.

Daryl Mitchel got an inside egde? Oh come on! The bat clearly hit the pad. How else would your explain the snicko? #NZvIND @ICC pic.twitter.com/ZgKHLDAmUJ

Williamson and Mitchell were stunned, and approached the on-field umpires, who had a discussion of their own.

India captain Rohit Sharma and MS Dhoni gathered around but in the end Mitchell had to respect the umpire's decision.

The decision went down poorly with cricket experts and fans on Twitter. Here are some reactions:

And to make it worse. NZ have lost the review too. EPIC ?? https://t.co/wjCXw4nl3a

Once the DRS messed it up there was no solution other than asking the batsman to leave. The 3rd umpire has preferred snicko over hot spot. We haven't heard the last of this.

Chaos at @edenparknz! Dear @ICC A clear inside edge picked up by Hotspot on the review by #DarylMitchell, but 3rd umpire ignores it & declares him OUT, based on ball-tracking. #NewZealand lose their review. Indian Cricket Fans want a fair match. Plz. do justice. #NZvIND #INDvsNZ

As far as the match is concerned, New Zealand scored 158 for eight batting first at Eden Park.

India performed well with the ball after New Zealand won the toss and opted to bat, taking early wickets then restricting the hosts with some tight bowling to close the innings.

Krunal Pandya took three for 28 and Khaleel Ahmed finished with figures of two for 27 as the tourists prevented New Zealand from exploiting Eden Park's short boundaries.

New Zealand Cricket Team New Zealand vs India New Zealand vs India, 2nd T20I Cricket
Get the latest updates on Fifa Worldcup 2022 and check out  Fifa World Cup Schedule, Stats and Live Cricket Score. Like us on Facebook or follow us on Twitter for more sports updates. You can also download the NDTV Cricket app for Android or iOS.