Since Satnam Singh Bhamara became the first Indian-born player drafted by an N.B.A. team, Ballo Ke has celebrated the milestone as its own. 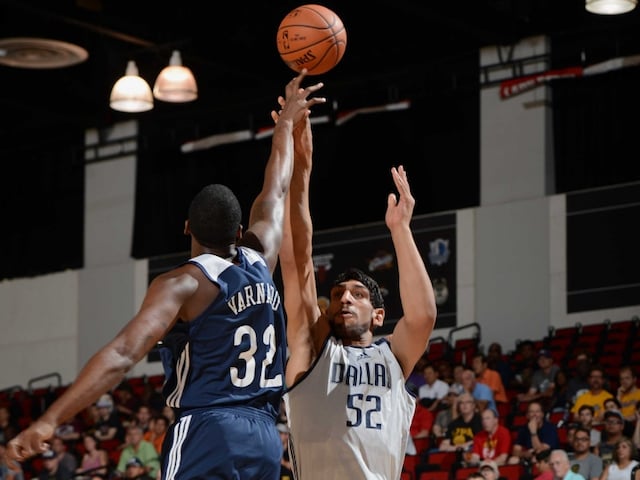 In this sleepy Punjabi village, no one was surprised to see a 7-foot-tall Sikh farmer striding the narrow lanes toward the local Sikh temple on June 25. The farmer, Balbir Singh Bamrah, is a familiar presence in Ballo Ke, and something of a local curiosity.

But the other worshippers at the temple, known as a Gurudwara, were a bit perplexed by the prayer the guru offered for Balbir Singh's household. He stood over the farmer, his wife and his daughter, and prayed for peace, prosperity, health - and that Balbir Singh's son would be drafted.

On the night of June 25 at the Barclays Center in Brooklyn - which, some 7,000 miles away in Ballo Ke, was the next morning - the Dallas Mavericks selected Satnam Singh Bhamara in the second and final round, making him the first Indian-born player ever to be drafted by a team in the National Basketball Association. It was reported that the 19-year-old athlete, who is 2 inches taller than his father, would start out with the Mavericks' Development League team, the Texas Legends.

The selection made little news in the United States, where the first-round draft picks garner most of the attention. But in India, it loosed a surge of national pride. The national dailies put his photo on their front pages. And in Ballo Ke, a village of about 800 people where the unusually tall, soft-spoken boy grew up to closely resemble his unusually tall, soft-spoken father, there was a celebration - not of an individual achievement, but of a collective one.

"Your son has honored the country and the village," a local politician told Balbir Singh, sweeping into the family's sitting room while his uniformed police escort waited outside, near a shed full of unimpressed cattle. (Satnam Singh Thanks his Coaches, IMG-Reliance for Support)

A small gallery of aging, turbaned farmers said much the same thing, sitting as they did every day on sacks of cement outside the gurudwara. Though many had children who followed them into farming, the men all hoped for better lives for their grandchildren.

"We want him to go even further," said Mukhtiar Singh, 62, who grows rice and wheat. "Satnam Singh can help us all get ahead."

Baldev Kaur, a lively 65-year-old midwife in the village, proudly recalled helping to deliver Satnam 19 years ago in a car on the way to the hospital, saying she had never seen a baby so big, at nearly 10 pounds.

She saw droves of reporters swarm the village in the days after the draft, asking the family about his shoe size (18 to 20, depending on the brand), how quickly he outgrew his clothes and what he read in school. She was not quite sure what basketball was, exactly, except that Satnam used to play it in his front yard when he came home for holidays.

"He used to do this" - she mimicked a dribble and a shot - "just like the Americans."

Balbir Singh, 56, said his son's success was a fitting cap to a decade of work and training. "Basketball is God's gift," he said in a rumbling baritone, while greeting a stream of visitors and answering calls on a cellphone dwarfed by his huge hands. "Everything that's happened to him, all the acclaim, is from basketball," he said.

Opinions vary locally about how it came to be that a boy from an out-of-the-way Indian village with no proper basketball court and a school that stops at fifth grade made it to the NBA. Balbir Singh credits his friend Rajinder Singh Bamrah, a slight man who now works in a district court. Rajinder Singh had an uncle who was a physical education teacher, and that made him one of the few locals who had ever heard of basketball.

When Satnam was 9 years old (and already 5-foot-3), Rajinder Singh put the boy in touch with administrators at the Ludhiana Basketball Academy, a coaching complex a few hours from the village. He also had a hoop made and attached it to a wall near the cattle shed so the boy could practice, and he led Satnam in coordination drills on a nearby railroad track.

"He used to get tired and wanted to go home," Rajinder Singh said. "I used to encourage him."

Satnam spent several years in Ludhiana, and then earned a scholarship to a private sports training academy in Florida, where he has studied and worked out for the past five years. His sister said Satnam was no scholar, but made up for his lack of academic flair with hard work, and had learned to speak English in Florida.

The men at the Ballo Ke shrine offer a different explanation, one reflective of a hard edge in an otherwise rejoicing village. They say the crucial factor was the family's link to Amarinder Singh, former chief minister of Punjab state, who visited the village as agriculture minister in the 1980s and struck up a friendship with Balbir Singh, even inviting him and his family to his daughter's wedding.

"It is all because of his favor," said Mukhtiar Singh, one of the men. Another, Nirmal Singh, said that without that kind of advantage, such a success story is "not just difficult, it's impossible."

Teja Singh Dhaliwal, general secretary of the Punjab Basketball Association and head of the Ludhiana academy, said there was potential for finding more raw athletic talent in the villages of Punjab, with its ancient tradition of hardiness in the face of invading armies.

"These are warriors," he said. "We have faced everything - severe cold, severe heat. We are fighters. Our blood is strong."

Balbir Singh seems anything but fierce, despite his size, and villagers describe him as exceedingly gentle. His height brought him stooped shoulders from a lifetime of hunching over a flour mill, and worry from neighbors in his youth that he would never find a suitable bride.

But when his son inherited that height, it brought Balbir Singh great distinction. He was driven to the nearby town of Tapa on June 28 so that a group of businessmen there could present him with a framed photo depicting Mother Teresa and the Hindu god Krishna, among other revered figures. They reached up to place a garland around his neck, and drank mango juice in the plain office that serves as something of a town hall. They spoke of Satnam.

"It would be very easy now to get him married," said a local journalist covering the event.