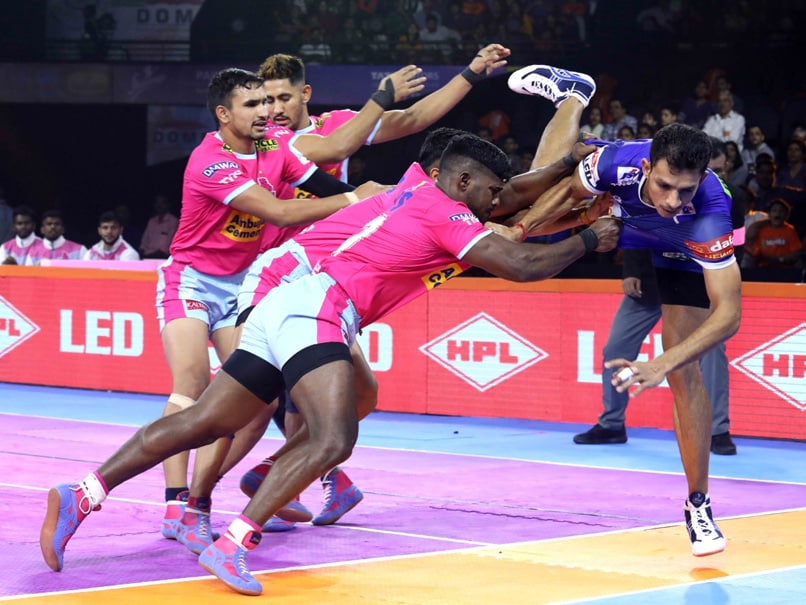 Maintaining their winning spree, Jaipur Pink Panthers registered an impressive 37-21 victory over Haryana Steelers in a Pro Kabaddi League (PKL) season 7 contest in Mumbai on Wednesday. Jaipur came into the match with confidence running high following back-to-back victories over Bengal Warriors and U Mumba. They had also beaten Haryana in the last three clashes between the two sides. In the other match, Rishank Devadiga's return gave UP Yoddha the momentum for their first victory of the season as they beat U Mumba 27-23.

For Jaipur, skipper Deepak Niwas Hooda led from the front with 14 points while Sandeep Dhull chipped in with six tackle points, his second High 5 in a row. For Haryana, defender Sunil returned with a High 5 in a losing cause.

Jaipur began the game strongly by getting Naveen off the mat in the fifth minute do-or-die raid which saw Amit Hooda make a strong double thigh hold to take Jaipur's score to 3-1. Sunil was immaculate in defense for Jaipur as he got three strong tackles out of the four he attempted.

He was equally matched by Jaipur's Sandeep who also got three tackles out of four attempts to take down Haryana's raiders, especially Naveen, as he got him twice in those efforts. Haryana were left in a slump when Deepak Hooda got the opposite captain, Dharmaraj Cheralathan, and Vikas Kale in a great move which was later reviewed by Haryana.

The half ended with Jaipur leading 13-8.

The second half saw Sandeep continue his good work to keep Naveen on the bench as he got a great thigh hold on him in the 21st minute. Vinay then capitalised on the mistakes made by Jaipur by getting Sandeep and Sunil Siddhgavali to reduce the margin to 11-20.

Jaipur then cruised ahead, as Deepak Hooda completed a Super 10 in the 33rd minute.

Ajinkya Pawar made life even more difficult for Haryana when he came in as a substitute and got rid of both the corners, Dharmaraj Cheralathan and Sunil, by sliding through their grips.

Deepak Hooda then made the most of the subsequent raid as he got rid of both the men on the mat to get Haryana All Out for the second time as Jaipur led 34-16.

The game ended 37-21 in favour of Jaipur who remain unbeaten in the league so far. Haryana will look to regroup before their next game against Tamil Thalaivas in Patna.