U Mumbai registered a 33-23 win over Puneri Paltan in the first match of the Mumbai leg in the Pro Kabaddi League season seven on Saturday. 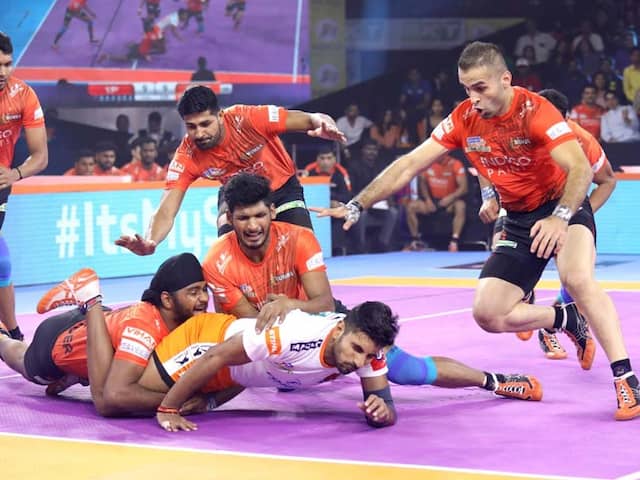 U Mumba won their second match of the season.© PKL

U Mumba started the Mumbai leg of the Pro Kabaddi League season seven with a 33-23 win over Puneri Paltan at the NSCI stadium on Saturday. Later in the other match, Jaipur Pink Panthers snatched victory from Bengal Warriors' grasp by 27-25. Indian cricket team captain Virat Kohli, who opened the Mumbai leg, said: "Kabaddi has taken a leap in the sports culture in our country since the inception of the Pro Kabaddi League. Seeing a sport that we all have played as kids to get to this stature today gives a different feeling altogether especially when you know that the Indian kabaddi team is one of the best ones throughout the world."

"Then seeing how players from all over the globe come to India to be a part of the Pro Kabaddi League shows that the level of the sport has been escalated exponentially. The reason kabaddi has become a world recognized sport is due to the fitness and determination of the Indian kabaddi players," Kohli added.

For U Mumba, Arjun Deshwal gained five touch points after entering in the fourth minute.

Both the teams went for the defensive plan with Fazel Atrachali and Surjeet Singh taking the call. They played the match on do-or-die raids with both teams trying to pick the crucial points. This made the first half to be low-scoring but equally intriguing one with patience playing the major role.

Puneri Paltan started the second half with just two men on the mat as U Mumba started with the raids. Amit Kumar was the last nail to be hit when his raid became unsuccessful and he returned without a touch in the 21st minute to make U Mumba's lead 15-9.

Rohit Baliyan's pursuit after Pawan Kadian's raid got a similar result when he got rid of Surjeet Singh which started the domino effect leading to Puneri Paltan being again all out in the 32nd minute.

Arjun Deshwal turned out to be the super-sub for U Mumba as he got rid of Manjeet and Surjeet Singh.