India vs Pakistan Kabaddi Highlights: India continued their dominance over Pakistan in this tournament with a second successive win over them 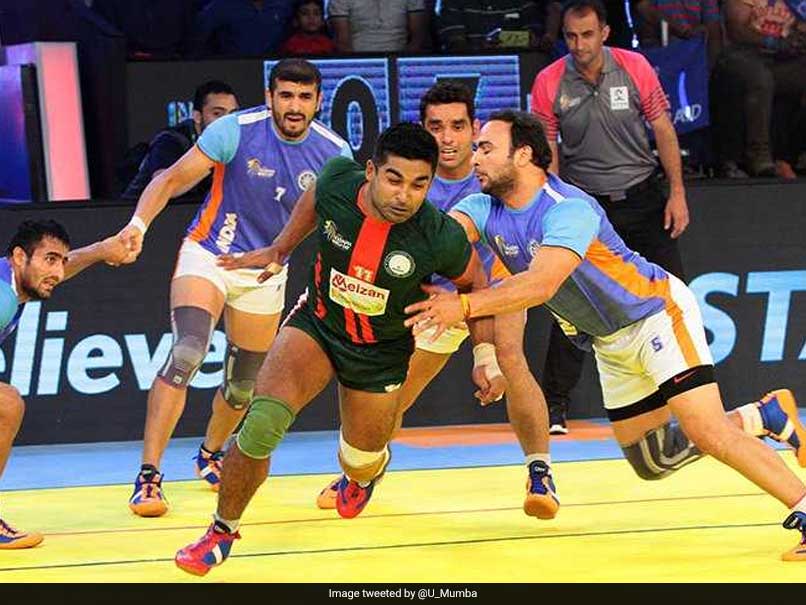 India beat Pakistan 41-17 to record their successive win over arch-rivals in the Kabaddi Masters Dubai 2018 on Monday. India had beat Pakistan in the first match by a decent margin and then sailed past Kenya in commanding fashion, reiterating their calibre in the event. Pakistan tried to avenge their defeat to India but India proved way too dominant for them. India looked in great nick and their dominance over Pakistan reflected in the final scoreline.

Highlights of India vs Pakistan Kabaddi Group A Match, straight from Dubai

22:14 IST: Thank you for staying with us for the live match updates.

22:08 IST: India beat Pakistan 41-17
A superb display by India in all areas earned them a deserving win over Pakistan. India were solid at the back and were led from the front by their skipper Ajay Thakur.

22:05 IST: This is a good show in the Indian set up. Fantastic defensive display. Monu Goyat gets 4 points for India after an all-out raid. Final 3 minutes to go now | India 38-16 Pakistan

21:56 IST: Monu Goyat gets his first raid point of the night for India. Pakistan are heading towards their second defeat at the hands of India in this tournament. Final 7 minutes to go. | India 30-13 Pakistan

21:37 IST: FIRST HALF ends | India 18-9 Pakistan
The first half belonged to India. They have been fantastic with their raids. They played to their strengths. Defended well. Pakistan were made to work hard but they did get back into the game with some crucial points.

21:30 IST: India still maintain their superiority in this match. India have a 9-point advantage over their arch-rivals Pakistan with 4 minutes to go for the first half. | India 15-7 Pakistan

21:20 IST: Super Raid! Rohit shows his reflexes. Do-or-die raid for Pakistan and Mudassar has nowhere to go. India get their point | India 8-3 Pakistan

21:17 IST: Ajay Thakur gets his first point of the night with a wonderful raid. | India 3-1 Pakistan

21:16 IST: Bonus point for India. Mudassar Ali is the next raider for Pakistan. | India 2-1 Pakistan

21:16 IST: Pakistan open their account with a point. Nadeem gets off the mark.

21:02 IST: We are moments away from the India-Pakistan clash.

20:40 IST: We are 20 minutes away from the highly anticipated clash between India and arch rivals Pakistan.

19:45 IST: Hello and welcome to the live match updates of the kabaddi match between India and Pakistan straight from Dubai

Earlier, India had thumped arch-rivals Pakistan 36-20 in their opening encounter of the inaugural six-nation Kabaddi Masters Dubai 2018 last Friday. India outclassed Pakistan in all-departments with skipper Ajay Thakur leading from the front. The 32-year-old scored a total of eight points helping India open a big lead up-front. After a cautious start, India soon picked up the pace, scoring points off successive raids. Both Ajay Thakur and Rohit Kumar helped India gain the initial lead. Although Pakistan looked solid in their defence, it was not enough to stop the top-ranked Indian raiders. At halftime, India held a comfortable 22-9 lead. In the second half, India continued with their raiding domination.

India looked far superior against the arch-rivals in the first match of the Kabaddi Masters. The world champions collected a total of 15 raid points compared to nine by Pakistan. In the defense department as well, India outclassed their opponents clinching 12 tackle points to Pakistan's eight. India will next play Kenya on Saturday.

Comments
Topics mentioned in this article
Kabaddi Live Blogs
Get the latest updates on SA vs IND 2021-22, check out the Schedule and Live Score . Like us on Facebook or follow us on Twitter for more sports updates. You can also download the NDTV Cricket app for Android or iOS.