India skipper Ajay Thakur led the team from the front picking a total of eight points in the Kabaddi Masters opener. 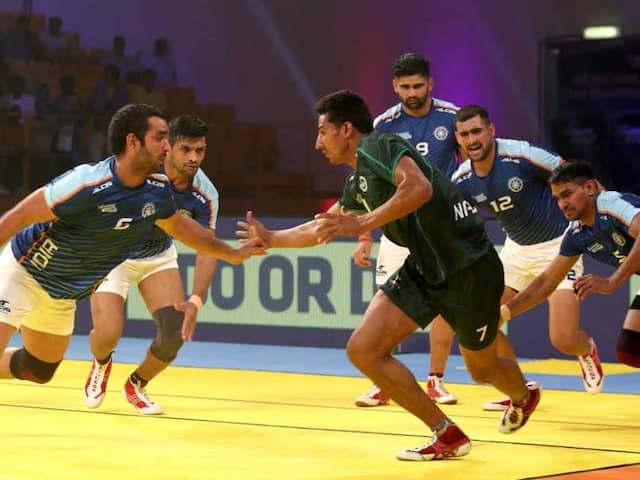 Kabaddi Masters 2018: India began the tournament with a comfortable win over Pakistan.© NDTV

World Champions India thumped arch-rivals Pakistan 36-20 in their opening encounter of the inaugural six-nation Kabaddi Masters Dubai 2018 on Friday. India outclassed Pakistan in all-departments with skipper Ajay Thakur leading from the front. The 32-year-old scored a total of eight points helping India open a big lead up-front. After a cautious start, India soon picked up the pace, scoring points off successive raids. Both Ajay Thakur and Rohit Kumar helped India gain the initial lead. Although, Pakistan looked solid in their defense, it was not enough to stop the top-ranked Indian raiders. At halftime, India held a comfortable 22-9 lead.

In the second half, India continued with their raiding domination. Teasing the Pakistan defenders, Ajay Thakur and Rohit Kumar picked points at will. For Pakistan, Ibrar Hussain and Mudassar Ali picked up points but overall they looked a bit outclassed and were all over the place in the Indian half of the mat.  Indians tackled the Pakistani players brilliantly as they suffered two all-outs in the match. In the final minutes, Pakistan managed to sneak in a few points but that was not enough to overhaul India's lead.

India looked far superior against the arch-rivals in the first match of the Kabaddi Masters. The world champions collected a total of 15 raid points compared to nine by Pakistan. In the defense department as well, India outclassed their opponents clinching 12 tackle points to Pakistan's eight. India will next play Kenya on Saturday.