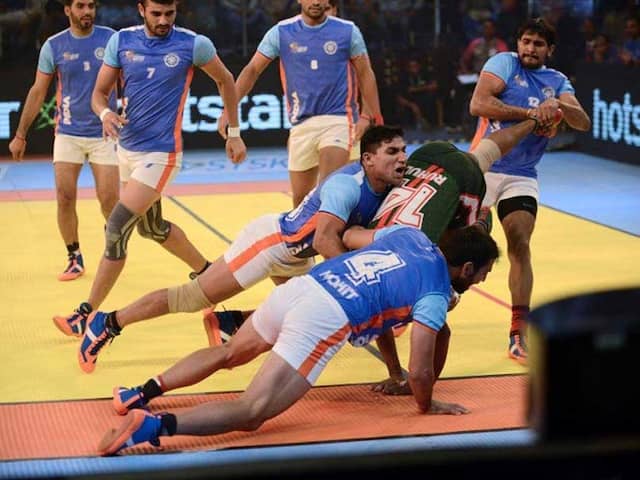 India thumped arch-rivals Pakistan 36-20 in their opening encounter of the inaugural six-nation Kabaddi Masters Dubai 2018 on Friday. After starting the game cautiously, India soon picked up the pace scoring points off successive raids. On the other side, Pakistan raiders looked clueless and were all over the place. The world champions continued with the raiding domination collecting a total of 15 points compared to 9 by Pakistan. Skipper Ajay Thakur led from the front scoring 8 points in the match.  In the defense department as well, India outclassed their opponents clinching 12 tackle points. Pakistan were no way near their opponents  as they got all-out twice during the match. Towards the end, India extended their with tackle points from Ajay Thakur and Rohit Kumar. India will next play Kenya on Saturday.

India beat Pakistan 36-20 in their opening match of the Kabaddi Masters Dubai.

20:43 IST: Another point for Rohit Kumar as India now lead 27-9 against Pakistan.

20:35 IST: HALFTIME! Ajay Thakur finishes off the first half in style for India. Raid point yet again! Captain leading from the front. Ind 22-9 Pak

20:10 IST: Review from Pakistan and its a success! No bonus point for India.

20:07 IST: First point for India. Ajay Thakur picks up a point with a hand touch.

20:03 IST: Bollywood superstar Abhishek Bachchan is at the center along with the captains from both the teams. Ajay Thakur wins the toss.

19:58 IST: Both teams are at the center. We are minutes away from the all-important clash.

19:46 IST: Big match for for both the teams. The atmosphere is electric at the Al Wasl Sports Club, Dubai. Pakistan as they have beaten India only once in the past.

19:45 IST: Hello and welcome to the live updates of the inaugural match of Kabaddi Masters between India and Pakistan.

It will be a test of character for either side that boasts of players who can change the game at any given point. Star raider Ajay Thakur, who led India to successive wins against Pakistan en-route their Asian Championship crown in Iran last year, will once again hope for a victorious start to the tournament on Friday. Besides Thakur, the Indian team also has quality raiders in Rahul Chaudhari, Pardeep Narwal, Rohit Kumar, Rishank Devadiga and Monu Goyat in their ranks. In Deepak Hooda, Manjeet Chhillar, Surender Nada and Girish Ernak, India also boast of top-class all-rounders and defenders to lend a perfect balance to the side. Highlighting the importance of the new tournament conceived by the International Kabaddi Federation (IKF) in partnership with Star India, India's newly-appointed coach Srinivas Reddy said it will be a "semi-final" before the Asiad, starting August 18. "This is the semi-final tournament before the Asian Games. This is also help us to prepare our strategy for the Asian Games," Reddy, a former India player told IANS. The second match of the opening day will see 2016 World Cup finalists Iran take on South Korea.

Comments
Topics mentioned in this article
Kabaddi Live Blogs
Get the latest Cricket news, check out the India cricket schedule, Cricket live score . Like us on Facebook or follow us on Twitter for more sports updates. You can also download the NDTV Cricket app for Android or iOS.