Pace sensation Umran Malik has been handed his maiden India cap ahead of the first T20 International against Ireland. 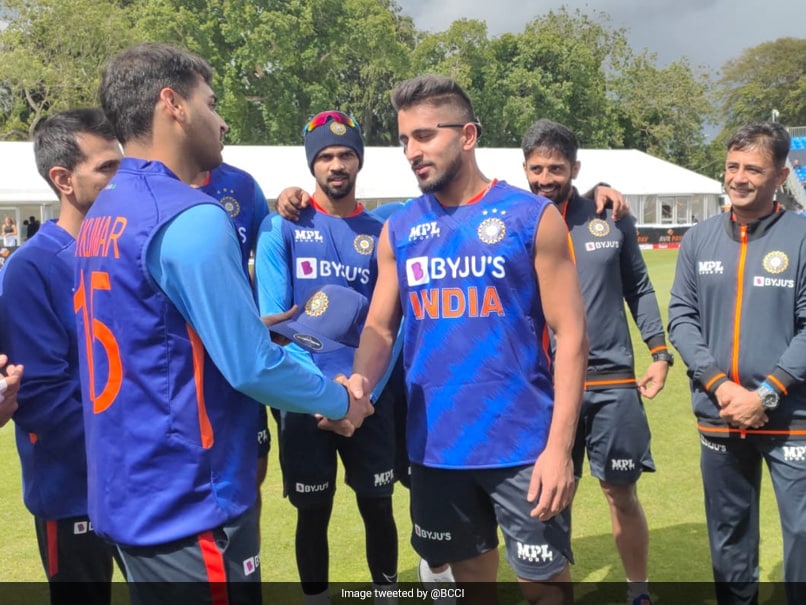 Pace sensation Umran Malik has been handed his maiden India cap ahead of the first T20 International against Ireland in Malahide on Sunday. 22-year-old Malik received his debut cap from his SunRisers Hyderabad teammate Bhuvneshwar Kumar. The BCCI shared photos of Malik receiving his cap. "A dream come true moment!!Congratulations to Umran Malik who is all set to make his T20I debut for #TeamIndia," the BCCI captioned the post.

A dream come true moment!!Congratulations to Umran Malik who is all set to make his T20I debut for #TeamIndia

Malik was picked for the T20I series against South Africa but did not get a game.

He was called up to the Indian squad after a breakthrough IPL season that saw him take 22 wickets and impress one and all with his raw pace.

India opted to field in the first T20I before rain delayed the start of the match by over two hours. With the match shortened to 12 overs a side, Umran Malik was given just the one over, which saw him concede 14 runs without taking a wicket.

India, however, went on to win the match with ease, after restricting Ireland to 108/4. Deepak Hooda and Hardik Pandya ensured India's chase was a smooth one after Ishan Kishan gave them a rollicking start.

With the 7-wicket win, India have taken a 1-0 lead in the two-match series. The second match is set to be played on Tuesday.

Hardik Pandya is leading India in the series, with the likes of Rohit Sharma, KL Rahul and Rishabh Pant in England preparing for the rescheduled fifth Test in Birmingham.

India Cricket Team Umran Malik Cricket
Get the latest updates on India vs Australia and check out  Schedule, Results and Live Score. Like us on Facebook or follow us on Twitter for more sports updates. You can also download the NDTV Cricket app for Android or iOS.