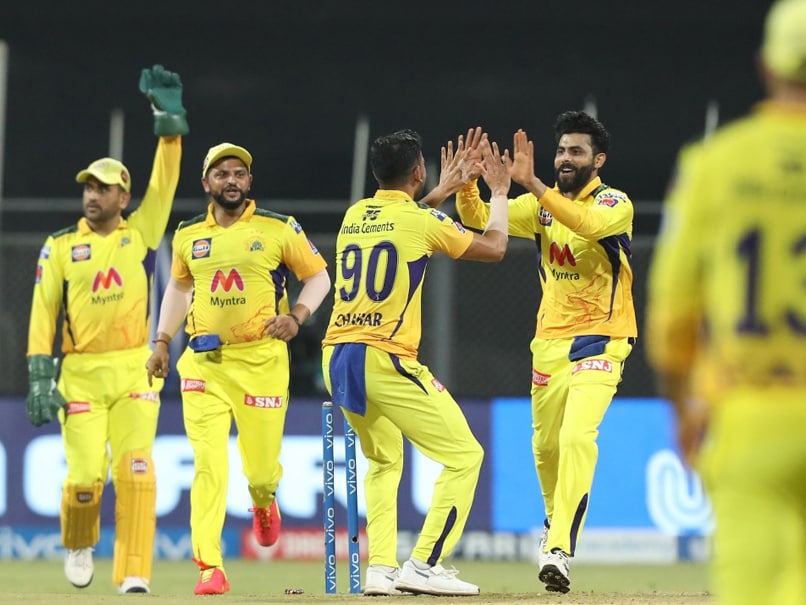 IPL 2021: CSK registered their first win of the season after beating PBKS.© BCCI/IPL

MS Dhoni, playing his 200th match for Chennai Super Kings (CSK), got the sweetest of gifts as his side defeated Punjab Kings (PBKS) by 6 wickets to register their first win of the IPL 2021 season at the Wankhede Stadium in Mumbai on Friday. Recovering from a disappointing performance in the opening match, Deepak Chahar ran through Punjab Kings top-order, picking four wickets for just 13 runs in his four-over spell. Punjab could not recover from the early setbacks and managed only 106 runs for the loss of 8 wickets in their 20 overs. Chasing a modest target of 107 runs, CSK lost opener Ruturaj Gaikwad cheaply but Faf du Plessis and Moeen Ali stitched a solid partnership for the second wicket, helping CSK all but cross the line. PBKS bowlers delayed the win for CSK by picking up three wickets in quick succession but lack of runs on the board meant they couldn't keep them from getting over the line.

With this win, CSK rose from bottom to go second on the IPL 2021 Points Table. Chasing the target inside 16 overs, boosted their Net Run Rate (NRR) as they leap-frogged several teams with the same number of points. Punjab Kings' NRR took a heavy toll as they dropped down to the bottom two on the points table. The Virat Kohli-led Royal Challengers Bangalore continue to top the ladder with two wins from two matches -- the only side yet to lose a game in the tournament. Below CSK are defending champions Mumbai Indians, followed by Delhi Capitals and Rajasthan Royals, who complete the top five. SunRisers Hyderabad are the only side, who are yet to open their account in the tournament and are dead last.

After a low-scoring game between Punjab Kings and Chennai Super Kings, there was not much change in the leading run-scorers' list, KKR's Nitish Rana is still occupying the top spot with 137 runs from two matches. Moeen Ali, who top scored for CSK with 46 runs, made his way to to the eighth spot, having scored 82 runs in two outings. Punjab Kings captain KL Rahul who was run out by Ravindra Jadeja, missed the opportunity to go up in the ladder after he added only five runs to his tally.

Deepak Chahar's Man of the Match performance helped him stake his claim to the Purple Cap as he rose to the sixth on the list with four wickets from two matches. Mohammed Shami who picked up two wickets in the match also made inroads to enter the top 10, finishing seventh, while his fellow fast bowler Arshdeep Singh was right behind him with as many wickets. RCB's Harshal Patel continues to lead the bowling chart with seven wickets from two outings, while Andre Russell is close second with six wickets, and Delhi Capitals' Avesh Khan is third on the list with five wickets.

Moeen Ali IPL 2021 Cricket Punjab Kings vs Chennai Super Kings, Match 8 IPL Points Table 2021
Get the latest updates on ICC Women's Cricket World Cup 2022 and IPL 2022, check out the Schedule , Live Score and IPL Points Table. Like us on Facebook or follow us on Twitter for more sports updates. You can also download the NDTV Cricket app for Android or iOS.