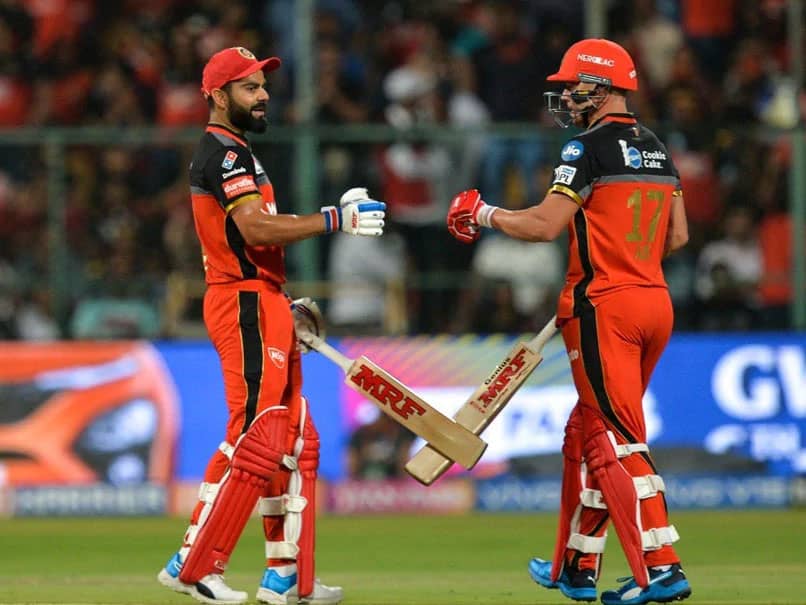 Virat Kohli and AB de Villiers are the top two scorers for RCB in IPL.© AFP

Royal Challengers Bangalore (RCB) are in the UAE for Indian Premier League (IPL) 2020 and the three-time finalists are building up to the tournament with three of their star players – Virat Kohli, AB de Villiers and Yuzvendra Chahal – getting accustomed to the off-field formalities like photo shoots in team jerseys. RCB posted a picture on social media showing Kohli, De Villiers and Chahal posing identically in team jerseys. Captioned “Aren't we looking match ready?” the picture creative brings to attention the time of the year when players from different nationalities came together under one umbrella to play the IPL.

Kohli, the captain of the side since 2012, led RCB to the final in 2016 but the following three seasons have been underwhelming as RCB finished at the bottom of the table in 2019 and 2017 and got the sixth place in 2018 in the eight-team tournament.

However, Kohli is the highest scorer in IPL history with 5412 runs at 37.84 with five centuries. Chahal is RCB's highest wicket taker among spinners with 100 wickets from 84 matches while de Villiers is the second-highest scorer for RCB with 4395 runs.

As it is, Kohli has started sweating it out immediately upon his arrival in UAE where he has been quarantined for six days as per the BCCI protocol.

Yesterday, RCB posted a picture on social media of a sweat-laden Kohli posing for the camera after a session of workout.

There was some doubt over the participation of South African players like De Villiers with the prevailing coronavirus pandemic but de Villiers landed in Dubai along with Dale Steyn and Chris Morris on August 22 to join the RCB squad.

The 13th season of IPL begins on September 19.

Yuzvendra Chahal IPL 2020 Cricket
Get the latest updates on IPL 2021, IPL Points Table , IPL Schedule 2021 , live score . Like us on Facebook or follow us on Twitter for more sports updates. You can also download the NDTV Cricket app for Android or iOS.