In 2016, Virat Kohli had the most successful season by any batsman in the IPL as he scored 973 runs, including four centuries. 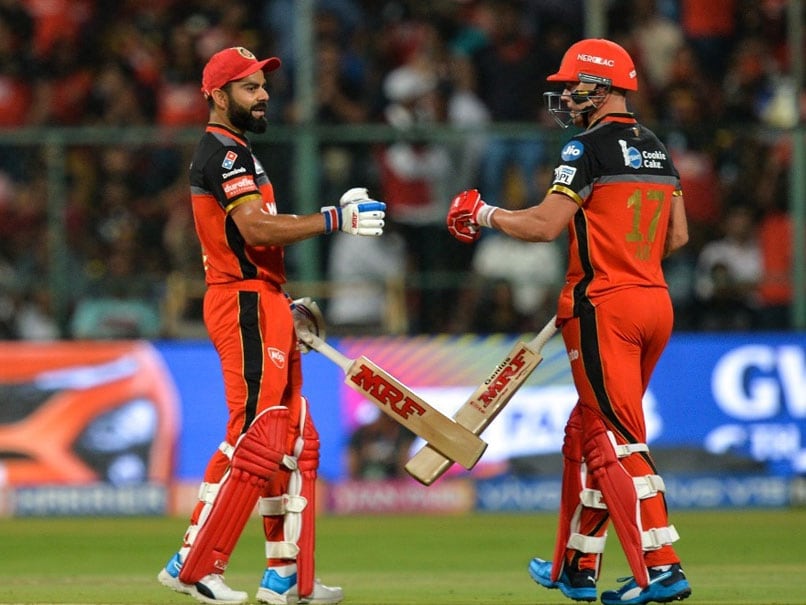 Virat Kohli and AB de Villiers share a great camaraderie on and off the field.© AFP

Virat Kohli and AB de Villiers share a great camaraderie on and off the field and it was clearly visible when the Royal Challengers Bangalore teammates were live on Instagram for a heartfelt chat on Friday. As expected, they started by requesting their fans to be positive during this tough time and promised to do their bit to help people overcome the problems they are facing due to the coronavirus pandemic.

Virat Kohli and AB de Villiers helped RCB score 248 in an IPL 2016 game against the Gujarat Lions and broke their own record for the then-highest partnership in T20 cricket as they put on 229 runs together.

It was a memorable game for both the players and their fans. In a heartwarming gesture, both Kohli and De Villiers decided to put the bats, jerseys and gloves from that game for auction. The money raised will be used in the fight against coronavirus in India and South Africa.

"In 2016 IPL match against Gujarat Lions, we both scored centuries, it was a good partnership, it was an enjoyable one, I got 120 odd and you got your hundred towards the end, it was the Green game, we did our bit for creating awareness about the environment," De Villiers said.

"The plan now is to get our kits to go for an online auction, the green kits would go for auction, people can go and bid and all the proceeds will go the COVID-19 fund and it is a cause which will provide food to the maximum number of people," De Villiers added.

Virat Kohli got really emotional about RCB and thanked fans for supporting the team despite the ups and downs. He described the experience of playing for RCB as surreal and vowed to not play for any other team in the IPL. "No matter what happens, I'm never leaving RCB," Virat Kohli told AB de Villiers, who has been associated with the franchise since 2011.

In 2016, Virat Kohli had the most successful season by any batsman in the IPL as he scored 973 runs, including four centuries.

Virat Kohli and AB de Villiers then picked their ODI team comprising of India and South Africa players from the recent times.

MS Dhoni was chosen as the captain and Gary Kirsten was made the head coach of this team.

Both the cricketers then described their friendship in a word before wrapping up the live session. While AB de Villiers said that his bond with Virat Kohli is "timeless", the India captain said that his rapport with the former South Africa skipper is "based on trust."

AB de Villiers Cricket
Get the latest updates on T20 World Cup, check out the T20 World Cup Schedule and Live Score . Like us on Facebook or follow us on Twitter for more sports updates. You can also download the NDTV Cricket app for Android or iOS.