MS Dhoni Is "Genius": Sam Curran On CSK Skipper's Decision To Promote Him In Batting Order

While chasing 163, MS Dhoni sent Ravindra Jadeja and Sam Curran to bat ahead of him and the Englishman went on to play a cameo of 18 runs off just 6 balls to put CSK in a comfortable position. 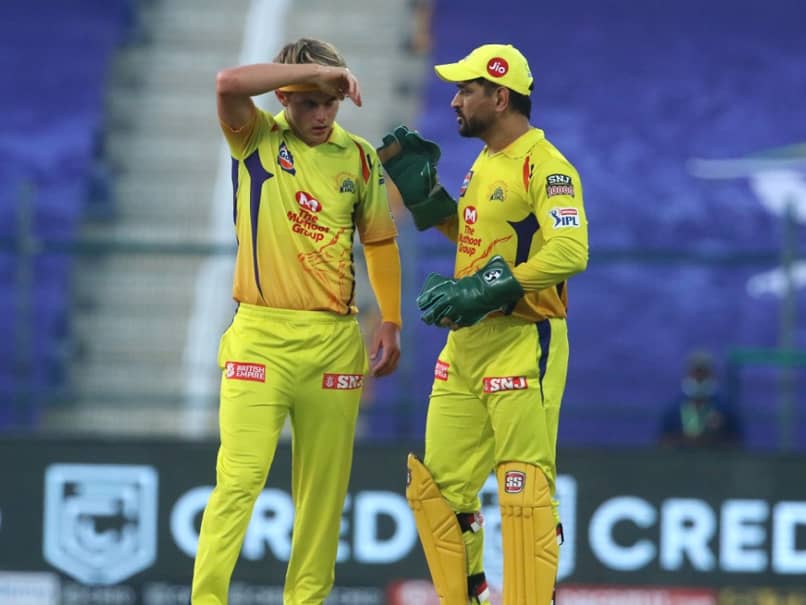 Sam Curran having a word with CSK skipper MS Dhoni while bowling against Mumbai Indians.© BCCI/IPL

After defeating Mumbai Indians by five wickets in the opening match of the Indian Premier League (IPL) 2020, Chennai Super Kings all-rounder Sam Curran hailed skipper MS Dhoni describing him as a ''genius''. While chasing 163, Dhoni promoted Ravindra Jadeja and Sam Curran ahead of him and as a result, the Englishman went on to play a cameo of 18 runs off just 6 balls to put CSK in a comfortable position.

In the end, Faf du Plessis and MS Dhoni guided CSK to a five-wicket victory over Mumbai Indians in Abu Dhabi.

"I was actually really excited when I was coming to the Chennai team. Haven't met a lot of guys, straight on the bus, haven't had much to think, landed two days ago from the England-Australia series and straight out there to do what I do," ESPNCricinfo quoted Curran as saying.

"To be honest, very surprised I went in at number six but he's a genius, he obviously thought something. Great win in the end. I think the left-right combination was his plan. The 18th over from Krunal Pandya was the over we wanted to target - a six or out approach mentality. Take the risk, and if it comes off it comes off, if it doesn't, it doesn't," he added.

When asked why he chose to promote Curran and Jadeja, Dhoni after the match said: "At some point, I thought we needed to give Jadeja and someone like Sam Curran to go ahead in the batting order and express themselves. They still had two spinners remaining, and we tried to intimidate the bowler a bit, it was just a psychological aspect. We know we bat quite deep, and wanted them to go after the bowler. If you clear one or two sixes, then it is easier for the batsmen to follow."

For CSK, Ambati Rayudu played a match-winning knock of 71 while Faf du Plessis scored an unbeaten 58. For Mumbai, Pattinson returned with the best figures of 1/27 from his quota of four overs.

Sheikh Zayed Stadium, Abu Dhabi IPL 2020 Cricket Mumbai Indians vs Chennai Super Kings, Match 1
Get the latest updates on IPL 2021, IPL Points Table , IPL Schedule 2021 , live score . Like us on Facebook or follow us on Twitter for more sports updates. You can also download the NDTV Cricket app for Android or iOS.