IPL 2020: Steve Smith Gets The "GOAT" Welcome At Rajasthan Royals

IPL 2020: Rajasthan Royals posted a split image of Steve Smith being scanned using a digital thermometer upon arrival in the UAE. 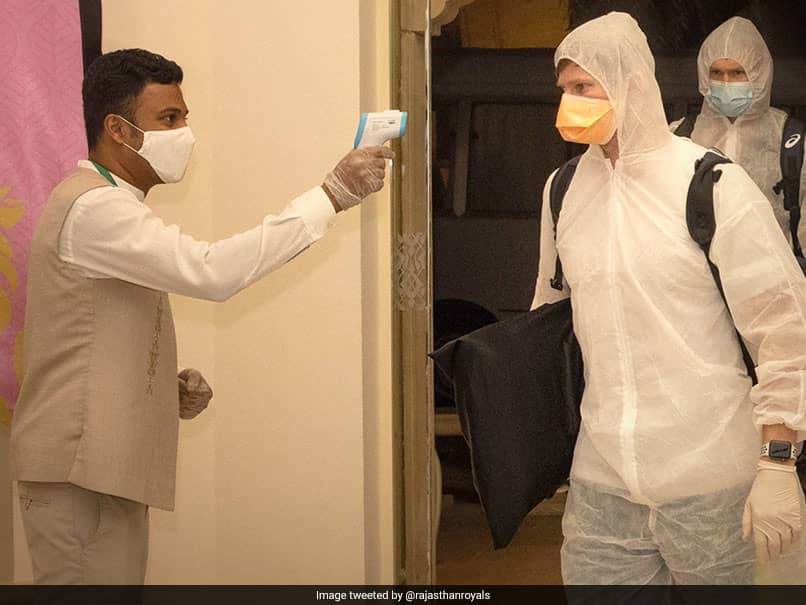 Rajasthan Royals (RR) have Steve Smith in their midst and they couldn't be more excited. Smith waved at them (and the fans) from his hotel room and Rajasthan have it as their pinned tweet on the official Twitter handle. Smith was scanned using a digital thermometer upon arrival in the UAE and unsurprisingly the reading on the device read “GOAT”. RR surely know how to welcome their captain and one of the leading batsmen in the world. Smith arrived directly from the UK where Australia's limited-overs series against England ended and is currently in quarantine.

Smith scored 319 runs from 12 matches for RR last season but the 2008 champions would expect returns matching the 2016 season when Smith scored 270 runs from just eight matches at an average of 45 and a strike rate of 153.40.

It's been a title drought for the champions of the inaugural IPL season ever since the win in 2008. They finished 7th last season following a fourth-place finish in 2018.

Besides Smith, RR also have the likes of Jos Buttler and Jofra Archer in their midst who have also landed from the UK after finishing their series against Australia back home.

Ben Stokes, another English superstar, is yet to arrive in the UAE. He was given leave on compassionate grounds from the England set-up, too, to tend to his ailing father in his country of birth, New Zealand.

The IPL gets underway on Saturday when CSK take on the defending champions Mumbai Indians in Abu Dhabi.

Steven Smith IPL 2020 Cricket
Get the latest updates on IPL 2020, check out the IPL Schedule for 2020 and Indian Premier League (IPL) Cricket live score . Like us on Facebook or follow us on Twitter for more sports updates. You can also download the NDTV Cricket app for Android or iOS.