SunRisers Hyderabad skipper David Warner said it was unfortunate that they lost Mitchell Marsh so early in the game and they will have to wait for his X-ray report. 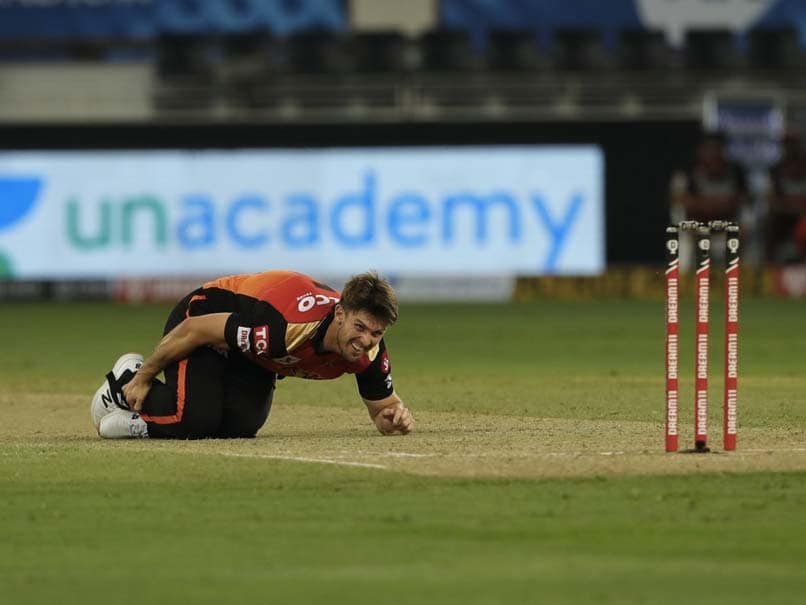 IPL 2020, SRH vs RCB: Mitchell Marsh seemed to have twisted his ankle on the 2nd ball of his first over.© BCCI/IPL

After the conclusion of the match against Royal Challengers Bangalore (RCB)in the Indian Premier League (IPL) 2020, SunRisers Hyderabad skipper David Warnerprovided an injury update on Mitchell Marsh. SunRisers Hyderabad stumbled to a 10-run loss, chasing a 164-run target against RCB on Monday. "Losing Mitch (Marsh) early, hopefully, he's okay, it doesn't look great. A lot of courage from him to walk out there and try his best, but it was unfortunate tonight. He's got to get an X-ray, hopefully, it's not too bad. It doesn't look great. Obviously, what you saw out there, it was quite painful, he can't put any weight on it. Fingers crossed," Warner said at the post-match presentation.

Mitchell Marsh came in to bowl the fifth over of the RCB innings, but on the second ball of the over, he seemed to have twisted his ankle. He bowled two more balls with excruciating pain but eventually decided to leave the field.

The right-handed batsman then came out to bat at number 10 and he was visibly limping. However, he was dismissed on the very first ball he faced, and as a result, SunRisers stumbled to a 10-run loss.

SunRisers were 121/2 at one stage and they were looking comfortable in their pursuit of 164. However, Yuzvendra Chahaland Navdeep Saini staged a stunning comeback for RCB and Hyderabad lost eight wickets for just 32 runs, losing the match by 10 runs.

SunRisers Hyderabad will next take on Kolkata Knight Riders on September 26 at the Sheikh Zayed Stadium in Abu Dhabi.

Mitchell Marsh Dubai International Cricket Stadium, Dubai IPL 2020 Cricket Sunrisers Hyderabad vs Royal Challengers Bangalore, Match 3
Get the latest updates on India vs Australia and check out  Schedule, Results and Live Score. Like us on Facebook or follow us on Twitter for more sports updates. You can also download the NDTV Cricket app for Android or iOS.