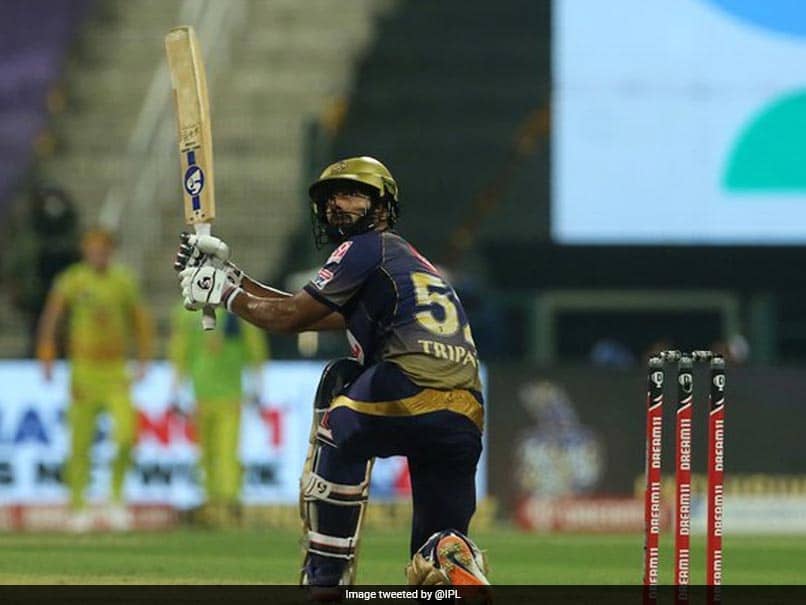 After playing a match-winning knock of 81 runs against Chennai Super Kings (CSK), Kolkata Knight Riders' batsman Rahul Tripathi said that his innings looks better as the bowling group of the side was able to defend the score of 167. KKR had defeated CSK by 10 runs at the Sheikh Zayed Stadium in Abu Dhabi on Wednesday. While batting first, KKR was bowled out for 167. Rahul Tripathi was the only batsman who was able to leave a mark as he played a knock of 81 runs.

Tripathi came out to bat as an opener for KKR against CSK and he was able to leave a mark immediately. Earlier, the Dinesh Karthik-led side was sending Sunil Narine out as the opening batsman.

"I think it has been really fun, there has been a belief from everyone in the coaching staff, Abhishek Nayar has worked with us mentally and also in technique and that has helped in remaining positive. When I was not playing, I was enjoying the moment and I was just preparing myself thinking that whenever my moment will come, I will look to contribute for the team," Tripathi told Varun Chakravarthy in a video posted on iplt20.com.

"My knock has become better because you guys bowled well and we won the game, winning knock changes everything, my knock is good because of the bowling group really bowling well through the middle overs. I was just thinking simple, I was just trying to look at the wicket and time the ball, I was not thinking too much. I was excited to open for KKR and along with Shubman," he added.

With the ball in hand, Narine bowled his first over in the 12th over of the CSK innings, and later on, he went on pick the crucial wicket of Shane Watson (50) to tilt the match in favour of KKR. Varun Chakravarthy also got the crucial wicket of MS Dhoni and from there on, CSK was not able to get any sort of momentum.

CSK was set a target of 168 runs and the MS Dhoni-led side found itself in a comfortable position at 99-1 in the 12th over with Shane Watson and Ambati Rayudu at the crease.

However, Ambati Rayudu was sent back to the pavilion by Kamlesh Nagarkoti, and from there on, KKR choked the runs and as a result, the Dinesh Karthik-led side won by 10 runs.

Pat Cummins Kolkata Knight Riders vs Chennai Super Kings, Match 21 IPL 2020 Cricket
Get the latest updates on IPL 2020, check out the IPL Schedule for 2020 and Indian Premier League (IPL) Cricket live score . Like us on Facebook or follow us on Twitter for more sports updates. You can also download the NDTV Cricket app for Android or iOS.