IPL 2020, KKR vs CSK: Chennai Super Kings choked at the death and slumped to a 10-run defeat to Kolkata Knight Riders in Abu Dhabi. 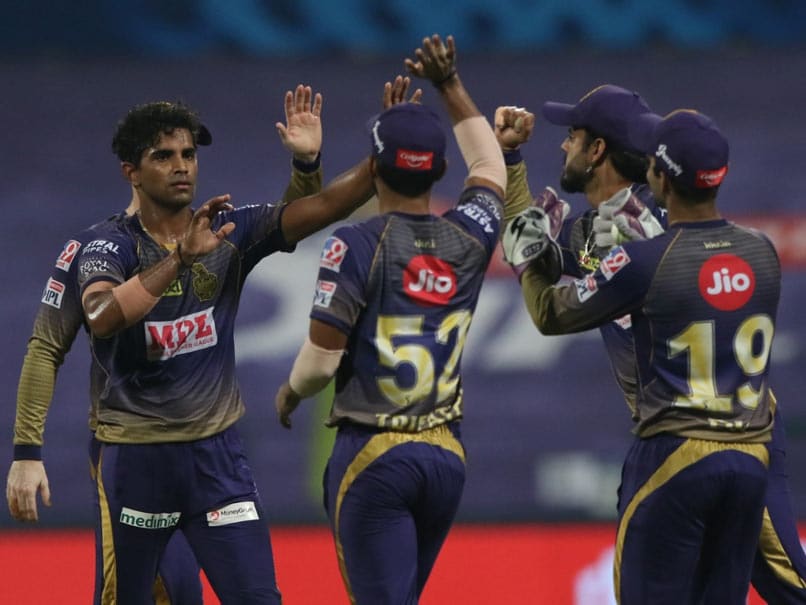 IPL 2020, KKR vs CSK: Kolkata Knight Riders climbed to No. 3 in the points table win a win over CSK.© BCCI/IPL

Chennai Super Kings (CSK) went from boom to bust within the space of three days as they slumped to a 10-run defeat from a winning position against Kolkata Knight Riders (KKR) on Wednesday in Abu Dhabi after having demolished Kings XI Punjab (KXIP) by 10 wickets on Sunday. Chasing KKR's 167, CSK found themselves 90/1 at the end of 10 overs needing a very manageable 77 off 60 balls. However, wickets of Ambati Rayudu (30 off 27) and Shane Watson (50 off 40) in consecutive overs turned the match in KKR's favour as a relatively untested middle order of MS Dhoni, Kedar Jadhav and Sam Curran failed spectacularly to see CSK limited to 157/5.

Dhoni was slow to get off the blocks and was bowled by Varun Chakravarthy for 11 off 12 balls while Jadhav (7 off 12) refused singles and didn't run hard for the second run as he tried and failed to get the big shots going.

Sam Curran looked good for his 17 off 11 but his stay was cut short before it could damage KKR's fortunes by Andre Russell.

Faf du Plessis (17 off 10) went early in the fourth over but Watson and Rayudu added 69 for the second wicket to put CSK on course for an easy win.

However, their wickets in the 13th and 14th overs escalated a collapse that the team would have done well to anticipate before the match.

Barring the domination of KXIP, CSK's middle order of Dhoni, Jadhav and Jadeja had only one fifty between them in the four matches.

Dhoni promoted himself to No. 4 with the team in a comfortable position despite the loss of Rayudu but could not stay till the end to take CSK home.

He was tied down by Chakravarthy in the 15th over and dismissed in the spinner's next – 17th of the innings – while attempting an ugly swipe across the line and missing it completely.

Curran was gone in the next and CSK choked in the death overs, getting just 10 off the penultimate over of the innings when 36 were needed off 12.

Sunil Narine, introduced in the 12th over, bowled four on the trot and finished 1/31. Kamlesh Nagarkoti, Shivam Mavi, Chakravarthy and Russell got a wicket each.

Earlier, Dinesh Karthik won the toss and opted to bat and Rahul Tripathi made full use of his promotion to the top of the order with an anchoring innings of 81 off 51 and had short bursts of support from Narine (17 off 9), who batted at four, and Pat Cummins (17 off 9) even as both Eoin Morgan (7) and Russell (2) had an off day.

Shubman Gill (11 off 12) and Karthik (12 off 11) went cheaply too as it looked at one stage that KKR had finished well under par.

As it turned out, under par was more than enough for an underwhelming CSK.

Kedar Jadhav Sam Curran Shardul Thakur Deepak Chahar IPL 2020 Kolkata Knight Riders vs Chennai Super Kings, Match 21 Cricket
Get the latest updates on IPL 2021, check out the IPL 2021 Schedule and Indian Premier League Live Score . Like us on Facebook or follow us on Twitter for more sports updates. You can also download the NDTV Cricket app for Android or iOS.