Chris Jordan was called for a short run by square-leg umpire Nitin Menon as he turned to take a second run at the striker's end. 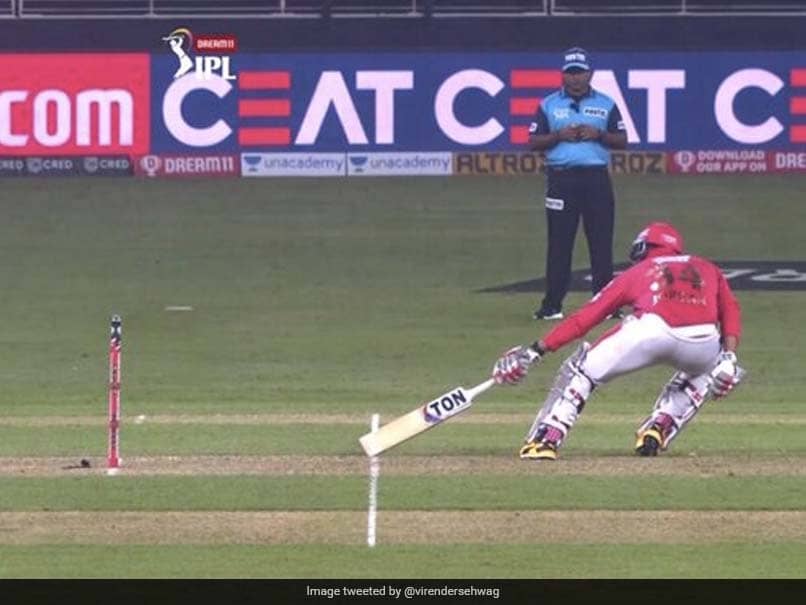 The DC vs KXIP IPL 2020 clash at the Dubai International Cricket Stadium had all the thrills and spills of a T20 game, all packed into one, and add to that it also had some controversy, which is threatening to boil over. Delhi Capitals beat Kings XI Punjab in a Super Over to get their IPL 2020 campaign off to a winning start, but did so by the skin of their teeth. Punjab threw away the match despite needing to score just a run off the final 3 balls. But that scenario wouldn't have even come to fruition had the umpire not called Chris Jordan for a short run.

Kings XI Punjab co-owner and Bollywood actor Preity was not in the least amused by the umpire's controversial call and made her feelings known on Twitter.

Former India cricketer Virender Sehwag too slammed the umpire for his decision and sarcastically said that he should have been given the Man of the Match award.

I travelled enthusiastically during a pandemic,did 6 days of Quarantine & 5covid tests with a smile but that one Short Run hit me hard. What's the point of technology if it cannot be used? It's time @BCCI introduces new rules.This cannot happen every year. #DCvKXIP @lionsdenkxip https://t.co/uNMXFJYfpe

I've always believed in being graceful in a win or loss & in the spirit of the game but it's also important to ask for policy changes that improve the game in the future for everyone. The past has happened and it's imp to move on. So Looking ahead & being positive as always

With Mayank Agarwal going great guns, KXIP were left needing 21 off the final 10 balls when Englishman Chris Jordan was called for a short run by square-leg umpire Nitin Menon at the striker's end.

One angle on TV replays showed that Jordan had in fact dragged his bat over the line but despite that the original decision made by Menon to dock Punjab a run was not overturned.

That meant by the end of the over, Kings XI Punjab needed 13 runs off the final six ball and not 12. Mayank Agarwal smashed 12 runs off the first three balls to bring the scores level but the match would have finished with Punjab winning with the three balls to spare had the 'short run' decision not been made.

In the end, Marcus Stoinis pulled a rabbit out of the hat, by bowling a dot ball, and following it up with the wickets of Agarwal and Chris Jordan to send the match into a Super Over.

Delhi Capitals went on to win the match in the Super Over at a canter after Punjab managed to score just two runs.

Virender Sehwag Mayank Agarwal IPL 2020 Delhi Capitals vs Kings XI Punjab, Match 2 Cricket
Get the latest updates on India vs Australia Series, check out the India vs Australia Schedule for 2020-21 and Ind vs Aus live score . Like us on Facebook or follow us on Twitter for more sports updates. You can also download the NDTV Cricket app for Android or iOS.