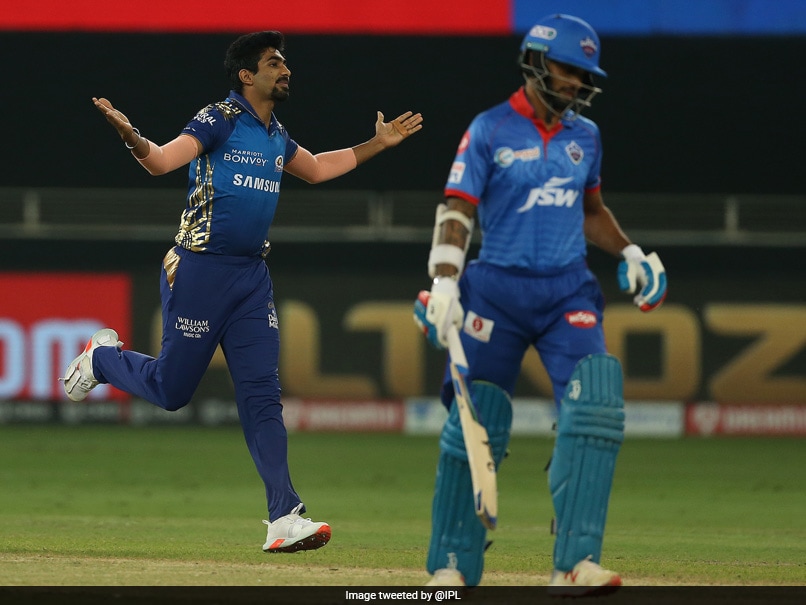 IPL 2020: Jasprit Bumrah gave away 14 runs and picked up 4 wickets against DC on Thursday.© Twitter

Mumbai Indians bowling coach Shane Bond heaped praise on Jasprit Bumrah, terming the pacer as the "best T20 fast bowler in the world". Mumbai Indians secured a spot in the final of the Indian Premier League (IPL) after thrashing Delhi Capitals by 57 runs in Qualifier 1at Dubai International Stadium on Thursday. Bumrah, who is the Purple Cap holder, conceded just 14 runs from his four overs and picked four wickets. "Jasprit, it's a privilege to watch. The best T20 fast bowler in the world go about his work," Bond said in a video posted by Mumbai Indians on Twitter.

Bond also praised Trent Boult saying that "I've loved working with Trent since 2012. We've seen him at his very best and I was very excited to have him in our team. Because I know what a devastating bowler he can be and he has done that through this tournament for us."

Sent in to bat, Mumbai Indians had put up a total of 200 runs on the board with Suryakumar Yadavand Ishan Kishan scoring 51 and 55* respectively. Also, Hardik Pandya played an unbeaten knock of 37 runs off just 14 balls.

Chasing the target, Delhi Capitalsgot off to a very poor start as their first three batsmen -- Prithvi Shaw, Shikhar Dhawan, and Ajinkya Rahane -- went back to the pavilion on a duck. Delhi Capitals only managed to score 143 runs with Marcus Stoinis being the highest run-getter from the team, playing a knock of 65 runs.

Bond is also impressed with his team's batting performance and said: "We are an intimidating batting line-up. You sit in the shed and it is just relentless. At 100/4, you felt that turn in the momentum. Delhi fought really hard through the middle of the innings and got themselves well back into the game. If they'd had a little bit more luck or perhaps been a little bit more accurate, we would have been under pressure at the back end."

Reflecting on his performance, Yadav said: "They have given me unbelievable freedom to express myself whenever I go to bat. And whatever the situation is, whether it is 10/1 or 50 or no loss. So, I just went out, expressed myself, and just played the way I play."

Jasprit Bumrah Shane Bond IPL 2020 Cricket
Get the latest updates on India vs South Africa and check out  Schedule, Results and Live Score. Like us on Facebook or follow us on Twitter for more sports updates. You can also download the NDTV Cricket app for Android or iOS.