Suryakumar Yadav was determined to do well after being ignored for the Australia tour and he produced a batting masterclass against Virat Kohli's RCB on Wednesday. 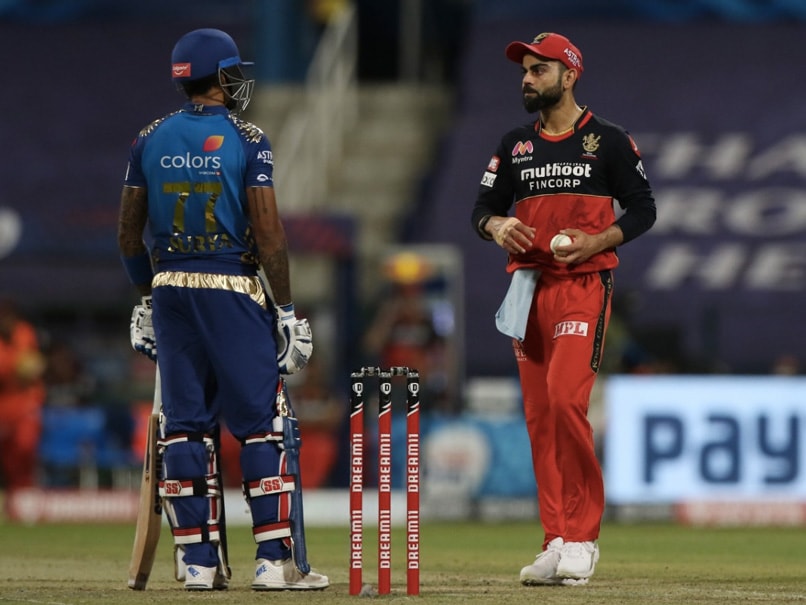 IPL 2020: Suryakumar Yadav kept his calm even as Virat Kohli tried to sledge him.© BCCI/IPL

Suryakumar Yadav, who was overlooked for India's tour to Australia, smashed an unbeaten half-century to help Mumbai Indians beat Royal Challengers Bangalorein Abu Dhabi on Wednesday. Suryakumar showed composure and he even kept calm when RCB captain Virat Kohli tried to put him off his game by sledging the Mumbai Indians batsman. A video from Wednesday's clash is going viral on social media in which Virat Kohli can be seen walking up to Suryakumar in a bid to sledge him but the top-order batsman kept his calm and walked away.

During the 13th over of the match, Kohli was seen walking up to Suryakumar and saying something while shining the ball. The right-handed batsman, however, kept his composure and displayed remarkable maturity by just walking away from the RCB https://t.co/kK72G6uTzg u Surya. pic.twitter.com/y2am9uhxXE

In the match, chasing a target of 165, Mumbai Indians got over the line with five wickets in hand.

Suryakumar Yadav was the star of the night with a fluent knock of 79 off just 43 deliveries. He hit 10 boundaries and three maximums during his stay in the middle.

Suryakumar was adjudged player of the match for his heroics with the bat that saw Mumbai consolidate their position at the top of the Indian Premier League 2020 points table.

Earlier, after being sent into bat, Virat Kohli-led RCB could only post a below-par total of 164 for six from their allotted 20 overs.

Devdutt Padikkal was the star with the bat for RCB. The left-handed opener scored 74 runs off 45 balls.

Jasprit Bumrah was the pick of the bowlers as he returned with figures of three for 14 from his quota of four overs at the Sheikh Zayed Stadium.

Virat Kohli IPL 2020 Mumbai Indians vs Royal Challengers Bangalore, Match 48 Cricket
Get the latest updates on Fifa Worldcup 2022 and check out  Fifa World Cup Schedule, Stats and Live Cricket Score. Like us on Facebook or follow us on Twitter for more sports updates. You can also download the NDTV Cricket app for Android or iOS.