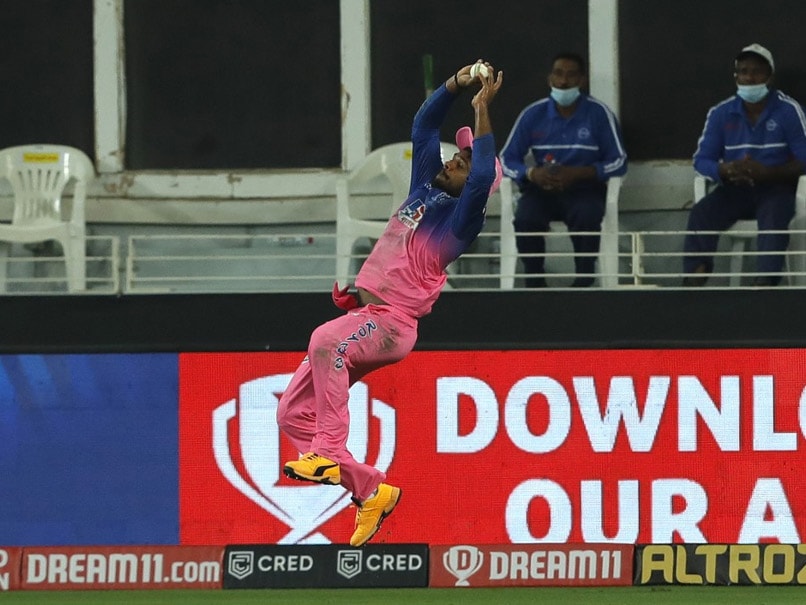 After impressing with his contributions with the bat, Sanju Samson displayed fine athleticism on the field by taking a remarkable catch while leaping backwards to dismiss Kolkata Knight Riders' Pat Cummins in Match 12 of Indian Premier League (IPL) 2020. Cummins hooked a short ball from Tom Curran towards square leg, and Samson, running in from deep mid-wicket, almost overran the ball before regaining his balance and leaping backwards to grab the ball behind his head.

How good was that catch from @IamSanjuSamson? Eyes on the ball and right into his hands. Super stuff from Sanju.https://t.co/iynXr5gSVn #Dream11IPL #RRvKKR

The IPL tweeted out a link to Samson's catch and captioned it “Spectacular Sanju grabs a stunner.”

Sachin Tendulkar reacted to Samson's effort that saw the fielder smash his head against the ground in the act of completing the catch.

Samson fell over after having grabbed the ball and for a moment seemed to have hit his head hard.

“Brilliant catch by @IamSanjuSamson!” tweeted Tendulkar. “I know how much it hurts when you bang your head like this on the ground. I experienced it in the 1992 World Cup in our match against the WI when I took a catch.”

Samson hit consecutive half-centuries for RR in their last two matches including 85 off 42 balls against Kings XI Punjab to help his side pull off the highest successful chase in IPL.

RR chased down 224 after Rahul Tewatia smashed six sixes in eight balls and Jofra Archer smashed 13* off 3 with three sixes in the last few overs.

Tom Curran IPL 2020 Rajasthan Royals vs Kolkata Knight Riders, Match 12 Cricket
Get the latest updates on ICC Women's Cricket World Cup 2022 and IPL 2022, check out the Schedule , Live Score and IPL Points Table. Like us on Facebook or follow us on Twitter for more sports updates. You can also download the NDTV Cricket app for Android or iOS.