Sanjay Manjrekar had questioned Mumbai Indians' decision to pick Alzarri Joseph instead of Lasith Malinga in the previous games. 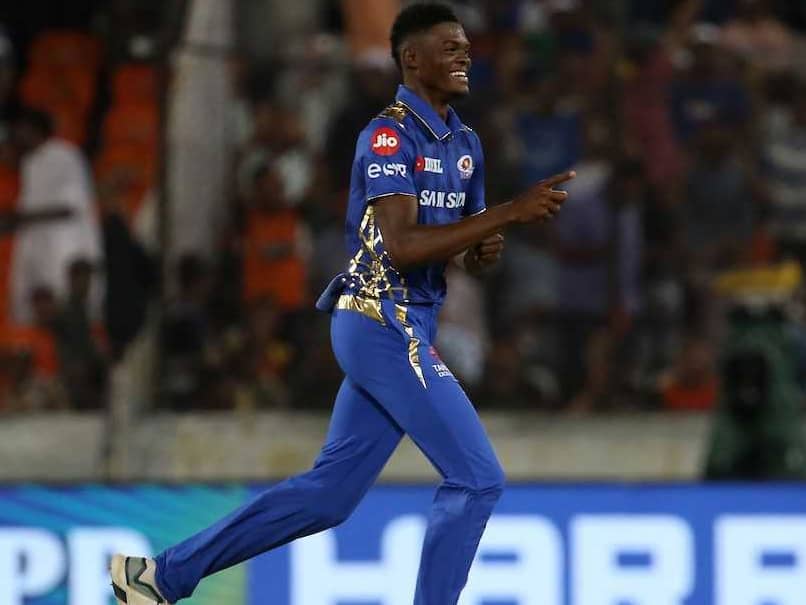 Alzarri Joseph registered the best figures in IPL history but has been ruled out due to an injury.© BCCI/IPL

Sanjay Manjrekar's comments on Twitter have time and again rubbed a great many people the wrong way. The former India batsman has ruffled a lot of feathers with his strong opinions and it was no different this time as well when he decided to have his say on the competition between Mumbai Indians pacers Alzarri Joseph and Lasith Malinga. Alzarri Joseph got his chance to make his mark in IPL 2019, when Lasith Malinga left Mumbai mid-way to participate in Sri Lanka's domestic competition.

Alzarri Joseph immediately set IPL 2019 on fire by recording the best bowling figures in the history of Indian Premier League in his debut match against SunRisers Hyderabad.

The 22-year-old from Antigua claimed 6 wickets for 12 runs in 3.4 overs to better Sohail Tanvir's record of 6/14 for Rajasthan Royals in the IPL's inaugural edition in 2008. Alzarri Joseph annihilated SunRisers Hyderabad batsmen as he became the second man to take a five-wicket haul on IPL debut.

Suddenly, Mumbai Indians had a selection headache with the returning Lasith Malinga having to sit out because of Joseph's terrific spell.

After the match, Sanjay Manjrekar questioned the selection of Joseph ahead of Malinga. Manjrekar opined that Mumbai's decision to pick the West Indian was based on "emotions" and not "cricket logic".

Fans came in their numbers to remind Manjrekar that selecting Lasith Malinga over Joseph, a bowler who in his previous match grabbed a league-best 6-12, was the emotional decision and not the other way around.

Emotions would have been if Malinga was playing in place of Joseph.

He has lost it

So you mean that they should have dropped someone who took 6/12 in his previous game? Is it logical? I mean, you want to sound different but this is like standing out like a fool.

To keep emotions out of play, wait for robots to play the game. As long as human beings are forming the playing XI, emotions will be there.
Cricket would not be a religion and Sachin a God, if logic would have operated the game.

Thankfully, logic prevailed over emotions when Dravid replaced you in 1996!

Are you serious? How can one deny chance for a guy who took the best figures in IPL history? How are you still in this business taking nonsense during and after the game? You can atleast try to think.The frustration among the viewers in India about your commentary is at peaks,man

Manjrekar, however, was not done just yet. Following Mumbai Indians' win over Royal Challengers Bangalore on Monday night, where Malinga took four wickets for 31 runs, the former batsman again took to Twitter.

He pointed to Twitter fans that his earlier stand on Malinga stood vindicated thanks to the Sri Lankan's performance against RCB at the Wankhede.

And I rest my case on this.https://t.co/x9q4tfSfbT

However, fans were having none of it and continued to troll the cricket-turned-commentator.

Your case didn't make any sense. Emotion would be going for malinga and logic means going with man who performed well in last game. Pathetic logic

Malinga was picked because Alzari is injured. No emotions only logic.

You sounded more emotional making a case for Malinga on air. Malinga got wickets because batsmen were throwing their bat on everything at that point, so...not a very strong case I'd say. Keep calm.

If emotions didn't play a part in cricket you would have been long gone. As once said by Pollard and I repeat "You can continue with your verbal diarrhoea"

U are saying opposite sir. Mi picking Malinga over alzarri would have been an emotional decision.

Mumbai Indians' selection headaches eased as Alzarri Joseph had to be ruled out of IPL 2019 with a shoulder injury.

The Antiguan youngster took a bad tumble while trying to prevent the ball from reaching the boundary in an IPL game between Mumbai Indians and Rajasthan Royals on April 13.

Lasith Malinga Sanjay Manjrekar IPL 2019 Cricket
Get the latest updates on IPL 2020, check out the IPL Schedule for 2020 and Indian Premier League (IPL) Cricket live score . Like us on Facebook or follow us on Twitter for more sports updates. You can also download the NDTV Cricket app for Android or iOS.