The new flashing bails have been in focus in several matches for not falling off the stumps in spite of hefty blows. 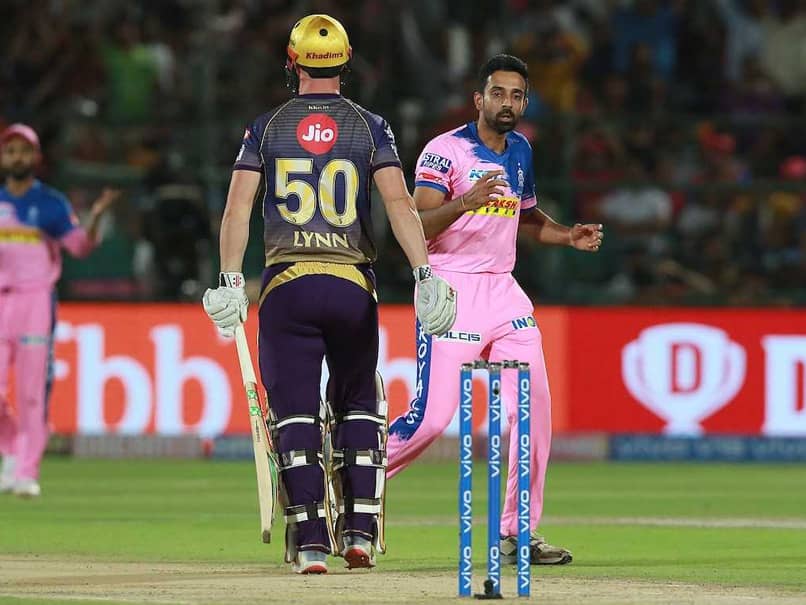 Chris Lynn survived despite the ball hitting the stumps.© BCCI/IPL

The RR vs KKR IPL 2019 match turned out to be a completely one-sided affair with visitors Kolkata Knight Riders dominating pretty much for the entirety of the game. Rajasthan Royals batsmen, barring Steve Smith, were never really able to take the attack to the opposition and despite losing just three wickets, could only manage 139 runs in their stipulated 20 overs. KKR chased down the target without breaking a sweat. While the game might have been drab affair for many fans, one incident piqued the interest of the entire cricketing fraternity.

Chris Lynn will be counting his lucky stars after surviving despite the ball hitting the stumps during KKR's innings. Surprisingly, the bails lit up as the ball came in contact with the leg stump but did not fall.

Simple rule change ... If the Zinger bails are going be used which I like .. If the Ball hits the stumps and the Bail lights up then it must be OUT ... We can't be having Bowlers Bowl a Batsman out then the bails not to come off but the Zingers be flashing .. #IPL2019

The incident took place in the fourth over of KKR's chase with Chris Lynn batting on 13. The Australian right-hander got an inside edge off Dhawal Kulkarni and the ball bumped into his leg stump but raced to the fine-leg fence for a boundary.

Incredibly, this is not the first time something like this has happened in IPL 2019.

On Saturday, lady luck came to Kings XI Punjab opener KL Rahul's rescue in the match against Chennai Super Kings at Chepauk. Rahul tried to sneak a single but MS Dhoni was at hand to quickly reach the ball and attempt a no-look throw.

Realising that the single was never on, Rahul tried to scamper back to the crease but it was too late as Dhoni brilliantly hit the stumps with his no-look throw. However, the stubborn bails refused to come off and Rahul survived.

Even MS Dhoni benefited from a similar incident when he was not out even after the ball hit the stumps during Chennai Super Kings' match against Rajasthan Royals on March 31.

Lokesh Rahul IPL 2019 Rajasthan Royals vs Kolkata Knight Riders, Match 21 Cricket
Get the latest updates on India vs Australia Series, check out the India vs Australia Schedule for 2020-21 and Ind vs Aus live score . Like us on Facebook or follow us on Twitter for more sports updates. You can also download the NDTV Cricket app for Android or iOS.