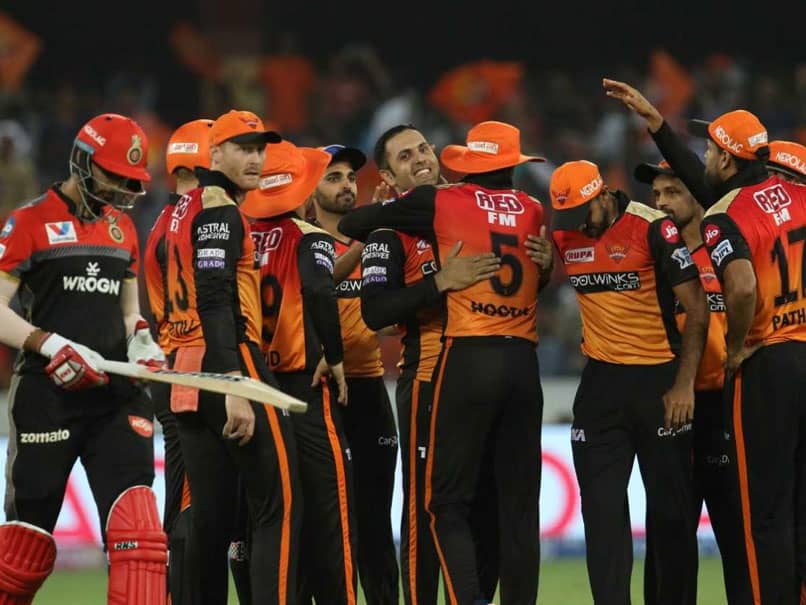 SunRisers Hyderabad (SRH) can reach playoffs even if they lose their final match.© BCCI/IPL

SunRisers Hyderabad (SRH), after registering a loss against Mumbai Indians (MI) in the Super Over, would look to come back stronger to beat Royal Challengers Bangalore (RCB) and remain in playoffs contention, when the two franchises cross swords at the M. Chinnaswamy Stadium on Saturday. SRH would be eyeing to shrug off their Super Over defeat and add two points to take their tally to 14 points. Despite their defeat against Mumbai Indians on Thursday, Hyderabad's net run rate is +0.653, which is superior to others in contention for the playoffs.

Even if the Hyderabad franchise lose their last match, they can still reach playoffs if Kolkata Knight Riders and Kings XI Punjab don't win more than one of their last two matches.

In the absence of their batting mainstay David Warner, young Manish Pandey (71 off 47 balls) shouldered the responsibility pretty well in the last match against Mumbai as he pushed the match into the Super Over after he carted Hardik Pandya for a last-ball six to bring scores level.

Mumbai Indians had scored 162 for five in the allotted 20 overs. Needing nine to win in super over, Pandya and Kieron Pollard took the side home with three balls to spare.

The Hyderabad franchise had managed 8 for 2 with Jasprit Bumrah bagging Pandey and Mohammed Nabi's wickets.

Captain Kane Williamson, all-rounder Vijay Shankar and comeback man Wriddhiman Saha will look to score in the key match. Hyderabad bowlers have performed well in patches and need to get their act together against Bangalore's master blasters AB de Villiers and Virat Kohli.

The visitors boast of multi-pronged attack in which Afghanistan's Rashid Khan has been the standout performer.

The Bangalore outfit will be playing for pride after their hopes of entering playoffs went up in smoke after their match against Rajasthan Royals was abandoned due to rain.