Muttiah Muralitharan is the bowling coach for SunRisers Hyderabad in the IPL. 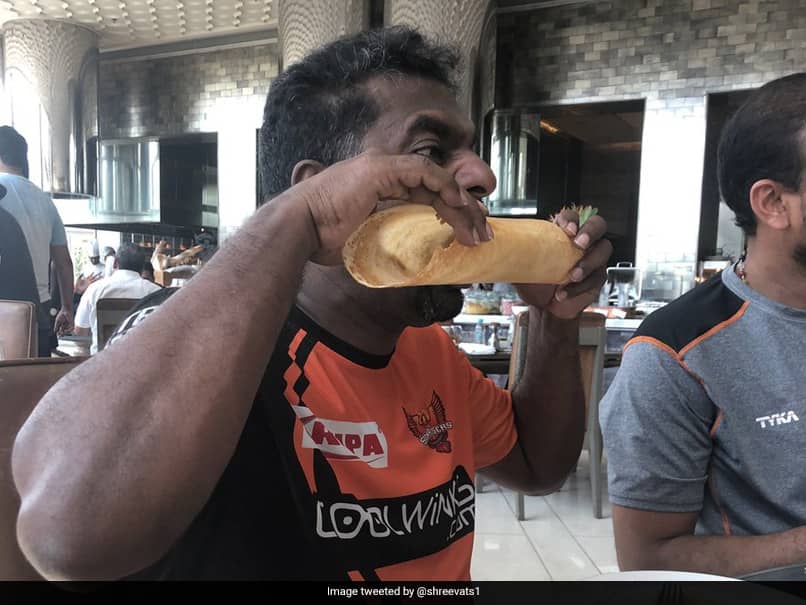 Muttiah Muralitharan, the SunRisers Hyderabad (SRH) bowling coach, was a force to reckon with in his heydays. The Sri Lankan terrorised batsmen from all over the world, on his home turf and overseas, and remained among the best in the world for over a decade. Muttiah Muralitharan, who claimed 800 Test wickets, might have retired from cricket but his killer instinct is still intact. In a picture posted on Twitter by SRH player Shreevats Goswami, Muralitharan can be seen taking down an unusual victim. The 46-year-old literally attacked a 'dosa' during a breakfast with his Indian Premier League franchise. "Breakfast view cannot get better this morning murali sir killing the dosa and how," Goswami captioned the photo.

Breakfast view cannot get better this morning murali sir killing the dosa and how pic.twitter.com/pg6EbRXSsK

Muralitharan's unique fetish garnered some hilarious reactions from his fans. Here are some of them.

From doosra to dosa, Murali has come a long way.

Murali always is the best at what he does !!! Eating dosa no different !!

When the demon is about to finish a prey

It's eerily similar to his bowling action. The expression and all.

SRH did not have the perfect start to their campaign in the IPL 2019, losing their opening clash against Kolkata Knight Riders by six wickets.

However, David Warner's form was a huge positive for SRH as the left-hander played some terrific shots en-route his sensational 53-ball 85 to help his side post a staggering 181/3 on the board in 20 overs.

Andre Russell, however, stole the show with some phenomenal power-hitting as he slammed 49 off 19 deliveries with the help of 4 sixes and 4 boundaries to take KKR home pulling off a magnificent chase. Nitish Rana (68) and Robin Uthappa (35) also played two crucial knocks as KKR bagged their first win of the season.

SunRisers Hyderabad will be looking to bounce back when they take on Rajasthan Royals in Hyderabad in their second game on Friday.

Muttiah Muralitharan IPL 2019 Cricket
Get the latest updates on India vs Australia Series, check out the India vs Australia Schedule for 2020-21 and Ind vs Aus live score . Like us on Facebook or follow us on Twitter for more sports updates. You can also download the NDTV Cricket app for Android or iOS.