MS Dhoni, livid with a botched no-ball decision, entered the playing field during the final stages of the Rajasthan Royals vs Chennai Super Kings match. 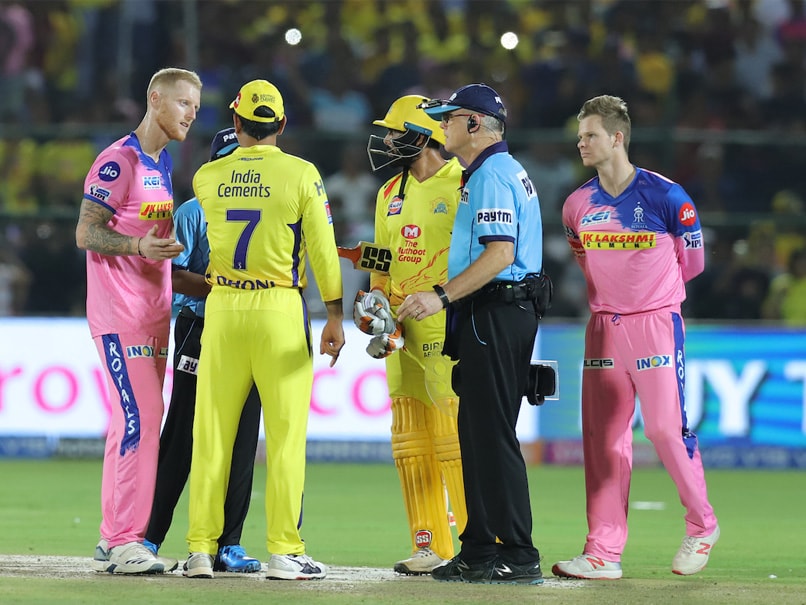 MS Dhoni was fined 50 per cent of his match fee for controversial no-ball incident.© BCCI/IPL

MS Dhoni left the cricketing world divided after taking the unprecedented step of walking onto the field to protest against an umpiring decision. The incident occurred in the final over of the RR vs CSK IPL 2019 match at the Sawai Mansingh Stadium in Jaipur on Thursday night. Dhoni stormed onto the field after the on-field umpires failed to award Chennai Super Kings a no-ball with three balls remaining. Ben Stokes' delivery appeared to be above the waist with Ulhas Gandhe, standing at the striker's end, raising his arm, only to be overruled by square leg umpire Bruce Oxenford.

Even as Ravindra Jadeja protested against the decision, a furious Dhoni walked onto the field to confront the two umpires. However, despite all his efforts, the decision stood.

Former England captain Michael Vaughan was not too pleased with the incident, saying there was no place in the game "for a Captain to storm onto the pitch from the Dugout".

This is not a good look for the game ... No place at all for a Captain to storm onto the pitch from the Dugout ... !! #IPL

While some fans agreed with what Vaughan was saying, others thought differently and backed Dhoni's decision to walk onto the field. Vaughan, though, didn't back down and stuck to his guns.

Don't tweet utter Rubbish ... As a Captain you have to respect the Umpires decision ... it was a terrible example to set ... https://t.co/A2aICbhOwb

The incident took place on the fourth ball of the final over with Stokes attempting a slower ball. The delivery turned into a waist-high full toss with Mitchell Santner still managing to club it away for a double.

Santner took another double of the penultimate ball, which was followed by a wide from Stokes. With CSK needing three off the last ball, Santner became an instant Chennai hero by smashing Stokes over long-on for a maximum.

Ravindra Jadeja Mitchell Santner Michael Vaughan IPL 2019 Rajasthan Royals vs Chennai Super Kings, Match 25 Cricket
Get the latest updates on IND vs NZ 2021, check out the Schedule and Live Score . Like us on Facebook or follow us on Twitter for more sports updates. You can also download the NDTV Cricket app for Android or iOS.