MS Dhoni Pulls Off Two Stumpings In An Over. "How Do You Do It?", Asks Twitter

MS Dhoni pulled off two brilliant stumpings to send Chris Morris and Shreyas Iyer back in the same over. 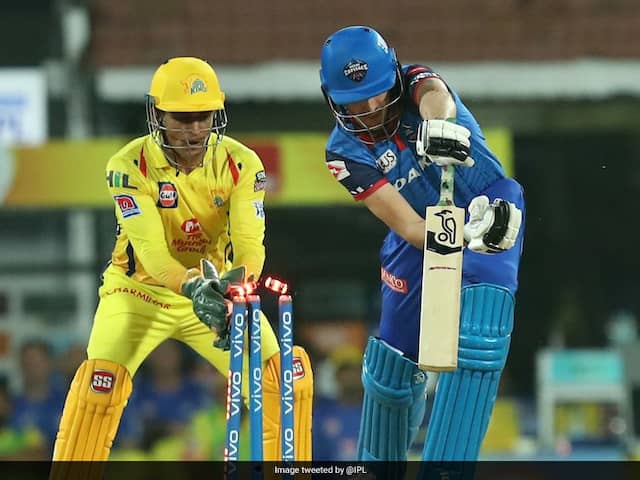 MS Dhoni and stumpings are a match made in heaven.© Twitter

MS Dhoni and stumpings are a match made in heaven. During an Indian Premier League (IPL) game between Chennai Super Kings and Delhi Capitals, Dhoni pulled off two brilliant stumpings to send Chris Morris and Shreyas Iyer back in the same over. In the 12th over of Delhi Capitals' innings, Ravindra Jadeja tricked Chris Morris with a turning delivery. The batsman's foot was in the air only for a few seconds but it was enough for lightning quick MS Dhoni to do the trick. Two deliveries later, in almost an action replay, Dhoni dismissed Shreyas Iyer just as he posed a major threat on 44.

WATCH: Do not mess with MSD's gloves

Twitter could not keep calm as half-fit Dhoni 's all round performance took CSK to the top of IPL 2019 points table.

MS Dhoni's hands should be the official logo for the bullet train ??

Delhi Capitals, who led the table at the start of the game, collapsed to 99 all out and an 80-run defeat.

Delhi Capitals were in the hunt whilst Iyer was at the crease but after he was stumped the dry pitch helped the spinners and South African bowler Imran Tahir took four wickets and Jadeja three to skittle the visitors out in less than 17 overs.

While Iyer lamented his side's failure to play "smart cricket", Jadeja hailed his captain's key role in their campaign: "In one word, MS Dhoni is a genius."

Both teams have already qualified for the playoffs that start next week.

MS Dhoni IPL 2019 Cricket Chennai Super Kings vs Delhi Capitals, Match 50
Get the latest Cricket news, check out the India cricket schedule, Cricket live score . Like us on Facebook or follow us on Twitter for more sports updates. You can also download the NDTV Cricket app for Android or iOS.