Kieron Pollard has taken a few brilliant catches in the IPL over the years but his latest effort will probably see him enter the bloopers reel. 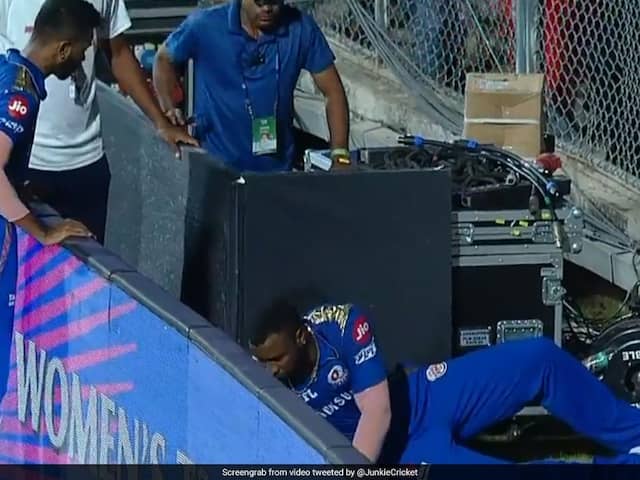 Kieron Pollard took a mighty tumble after trying to save a boundary.© Twitter

Kieron Pollard has taken some absolute stunners over the years in the Indian Premier League (IPL) and continues to be one of the best fielders in the world. Despite his big frame, Kieron Pollard's athleticism on the field is on par with the best in the business. Only last month, Kieron Pollard pulled of a sensational one-handed catch during the Mumbai Indians (MI) vs Chennai Super Kings (CSK) IPL 2019 clash to dismiss Suresh Raina and that miraculous fielding effort will go down as one of the best in IPL history. However, on Thursday, Kieron Pollard uncharacteristically found himself entering the blooper reel after his attempt at using football skills while fielding didn't have the desired outcome.

During the MI vs SRH IPL 2019 match at the Wankhede Stadium in Mumbai on Thursday, Pollard, who was stationed at mid-on, chased after a Wriddhiman Saha pull-shot. While the big West Indian's sprint saw him make up a lot of ground and reach the ball, his attempt to save the boundary didn't work out as well.

However, that was not the end of Pollard's embarrassment as the momentum of the sprint carried him up and over the advertisement hoarding.

Humpty Polly had a great fall https://t.co/L7Yrk1qJX1 via @ipl

While his teammates like Hardik Pandya and Quinton de Kock looked a bit concerned by Pollard's heavy tumble, commentators on-air at the time had a laugh riot.

"Look at the big fella go ... Boom and up and over. What do they call that manoeuvre in high jump?" said one commentator.

Luckily for the West Indian, besides being left red-faced, he didn't suffer any other harm.

Kieron Pollard Hardik Pandya IPL 2019 Mumbai Indians vs Sunrisers Hyderabad, Match 51 Cricket
Get the latest Cricket news, check out the India cricket schedule, Cricket live score . Like us on Facebook or follow us on Twitter for more sports updates. You can also download the NDTV Cricket app for Android or iOS.