Kieron Pollard, who turned 32 on Sunday, displayed his annoyance on the field after an umpiring howler in the IPL 2019 final. 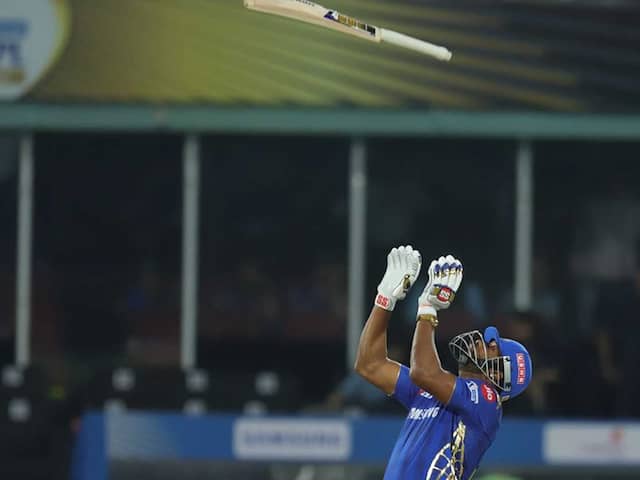 Kieron Pollard was left animated in the IPL 2019 final.© BCCI/IPL

Kieron Pollard, who turned 32 on Sunday, displayed his annoyance on the field after an umpiring howler in the Indian Premier League (IPL) 2019 final in Hyderabad. Kieron Pollard top-scored with unbeaten 41 runs as Mumbai Indians managed a respectable total of 149 for eight in 20 overs. In the final over, Dwayne Bravo bowled two consecutive deliveries wide outside the tramlines. While Kieron Pollard walked across to play the first ball, he let the other ball go despite not moving across. On-field umpire Nitin Menon deemed both the deliveries legal and infuriated Kieron Pollard, who threw his bat up in air and took the strike at tramlines before walking across further to leave the pitch.

Deepak Chahar claimed three wickets as Chennai Super Kings restricted Mumbai Indians to 149 for eight after they opted to bat at the Rajiv Gandhi International Stadium.

Captain Rohit Sharma gave Mumbai Indians a flying start along with opener Quinton de Kock as the duo started dealing in sixes from the beginning.

De Kock collected three sixes out of the four hit in the first three overs. After a frugal first over, Chahar went for 20 runs in the following one with the South African wicket-keeper batsman going for his strokes on a true surface.

De Kock was dismissed for 29 runs, while Rohit managed just 15 runs for Mumbai Indians in a crucial IPL final.

Both Mumbai Indians and CSK eye an unprecedented fourth crown in the IPL.

Kieron Pollard Cricket
Get the latest Cricket news, check out the India cricket schedule, Cricket live score . Like us on Facebook or follow us on Twitter for more sports updates. You can also download the NDTV Cricket app for Android or iOS.