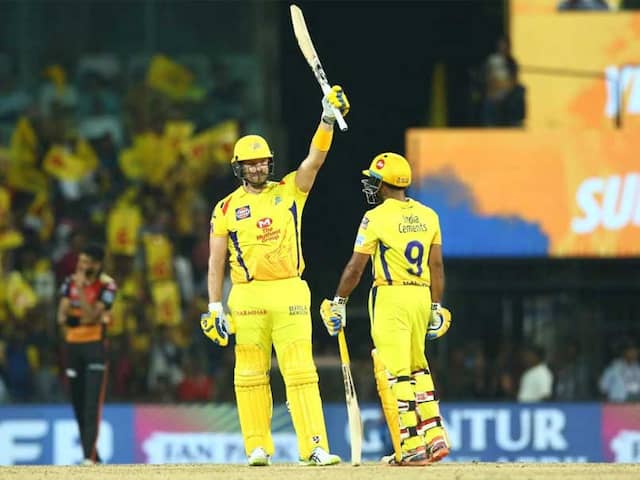 Chennai Super Kings (CSK) defeated SunRisers Hyderabad (SRH) by 6 wickets in match 41 of the Indian Premier League (IPL) 2019 at the MA Chidambaram Stadium in Chennai. Chasing 176 runs, CSK lost Faf du Plessis (1) early through a run-out. Shane Watson, who was joined by Suresh Raina then plundered boundaries at will as the right-left hand pair stitched together 77 runs for the second wicket. Raina scored 38 off 24 balls. His innings included 6 fours and 1 six. Watson struck form as he notched up his 17th IPL half-century. He single-handedly took CSK to the doorstep of victory before getting out on 96. He missed his 5th IPL century by a whisker. He put on an 80-run stand with Ambati Rayudu (21). Kedar Jadhav (11 not out) hit the winning runs for CSK. With this win, CSK go top of the points table with 8 wins (16 points). Earlier, SRH scored 175/3 in 20 overs courtesy an unbeaten 83 by Manish Pandey. (SCORECARD)

MA Chidambaram Stadium, Chennai Cricket Live Score Live Cricket Score Live Blogs
Get the latest Cricket news, check out the India cricket schedule, Cricket live score . Like us on Facebook or follow us on Twitter for more sports updates. You can also download the NDTV Cricket app for Android or iOS.