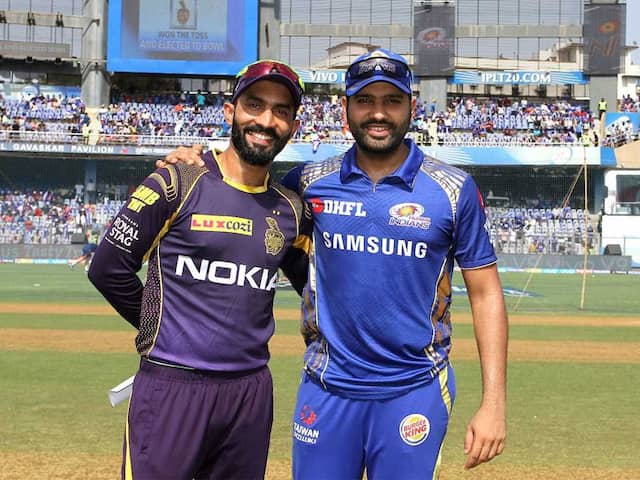 Mumbai Indians are in fine form but the same can't be said for KKR, who have lost 6 matches in a row.© BCCI/IPL

Mumbai Indians will be eyeing top spot in the IPL 2019 Points Table when they travel to Kolkata to take on a Kolkata Knight Riders side, which is in freefall. Eden Gardens will play hosts to the KKR vs MI IPL 2019 clash on Sunday night. The two teams have had contrasting fortunes in the league this season. While KKR started IPL 2019 with a bang, winning four of their first five matches, Mumbai Indians made a slow start, losing two of their first three games. However, while Mumbai Indians have seen a an upsurge in results that has seen them climb to second spot in the table, KKR have lost six matches in a row that has seen them drop to sixth place, joint on points with 7th placed Rajasthan Royals and bottom of the pile Royal Challengers Bangalore (RCB).

Mumbai Indians boast of a better run-rate than MS Dhoni's CSK and two points will be enough to see them leapfrog the Chennai outfit into pole position.

Incidentally, Mumbai will play KKR twice in the space of one week.

The Rohit Sharma-led side have been KKR's nemesis ever since the tournament began, racking up a mammoth 18 wins to KKR's five in 23 meetings.

While Mumbai have been in good form with skipper Rohit Sharma also finding his touch against MS Dhoni-less CSK with a match-winning 67, it has fallen apart for KKR.

Dinesh Karthik's men lost six games in a row and are all but out of a playoff reckoning. A defeat on Sunday would ensure their early exit.

Karthik played a lone hand in their three-wicket loss to Rajasthan Royals on Thursday with a career-best 97. KKR were on course to register a much-needed triumph when 17-year old Riyan Parag and Jofra Archer combined for a 44-run stand to take the game away from them.

KKR's poor pace bowling effort once again came to the fore as none of the pacers helped spinners Sunil Narine (2/25) and Piyush Chawla (3/20) who accounted for five wickets together and kept the run flow in check.

At Eden, Mumbai have won seven times out of a possible nine.

Andre Russell IPL 2019 Kolkata Knight Riders vs Mumbai Indians, Match 47 Cricket
Get the latest Cricket news, check out the India cricket schedule, Cricket live score . Like us on Facebook or follow us on Twitter for more sports updates. You can also download the NDTV Cricket app for Android or iOS.