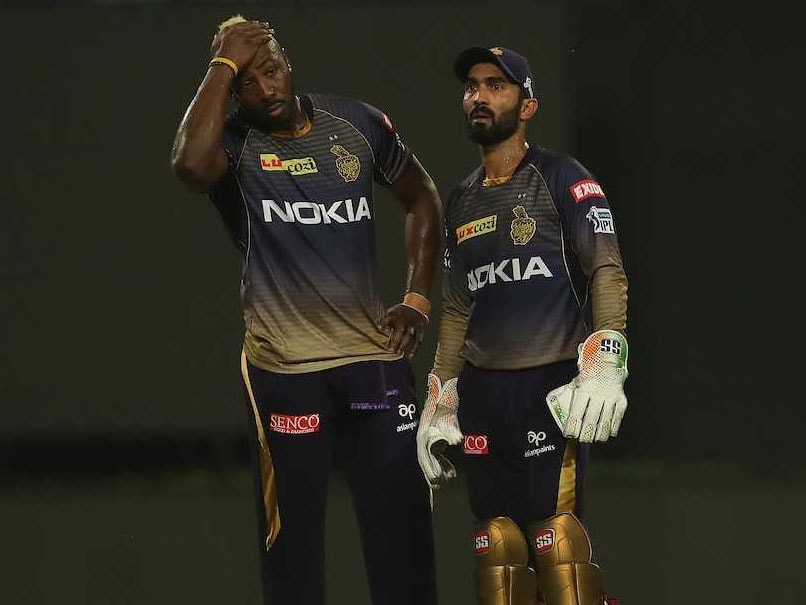 Kolkata Knight Riders are struggling to make it to the playoffs.© BCCI/IPL

Kolkata Knight Riders (KKR), who won four of their first five matches of the ongoing Indian Premier Leagueseason, have lost their last six matches and are placed sixth in the points table with 8 points after 11 games. In spite of having one of the most destructive batsmen in world cricket, Andre Russell, in their ranks, KKR are struggling to make it to the playoffs. Russell, who has taken the 12th edition of IPL by storm with virtuoso displays, amassing 406 runs in 10 innings at a strike rate of 209.27, feels that bad decisions cost KKR the games, as they used the wrong bowlers at the wrong time. He also accepts that KKR are the worst fielding side in the competition and he has been feeling quite low since the loss against Rajasthan Royals.

"We have been making bad decisions, (and if we keep repeating them) we will always lose games and that's what we've been doing. I could pinpoint a few games where had we just looked to bowl in the right areas or maybe, bowl bowlers who could have restricted the game, it would have made a difference," Russell rued.

"The batting hasn't been struggling really. We got the totals that we should have defended. We've been the worst fielding team so far," he said.

Talking about his batting position, Russell said that he is ready to play any role according to his team's demand.

"I have had conversations with the coach. He's backing me to go in whenever the team needs me. They are going to have me as a floater now instead of me always batting down the order. If they need me to bat at No. 3-4, that would be my job," he said.

On the team morale, Russell said since KKR's defeat to Rajasthan Royals on Thursday, he has not stepped out of his hotel room.

"I have been in my room for the last couple of days. After losing one game after another, I'm not the type of guy who would walking around, pretending that I'm doing something good. We have to have passion inside and not show it on TV. I am very passionate inside," Russell said.

Talking about KKR's match against Mumbai Indians on Sunday, Russell said it will take a miracle for them to beat Rohit Sharma's men.

KKR need to win their remaining three games and hope other results go their way in order to make it to the playoffs.

Andre Russell IPL 2019 Cricket Kolkata Knight Riders vs Mumbai Indians, Match 47
Get the latest updates on IPL 2021, check out the IPL 2021 Schedule and Indian Premier League Live Score . Like us on Facebook or follow us on Twitter for more sports updates. You can also download the NDTV Cricket app for Android or iOS.