Chris Morris took three wickets in the space of five balls in the 18th over as the stunned home crowd watched their side's batsmen capitulating. 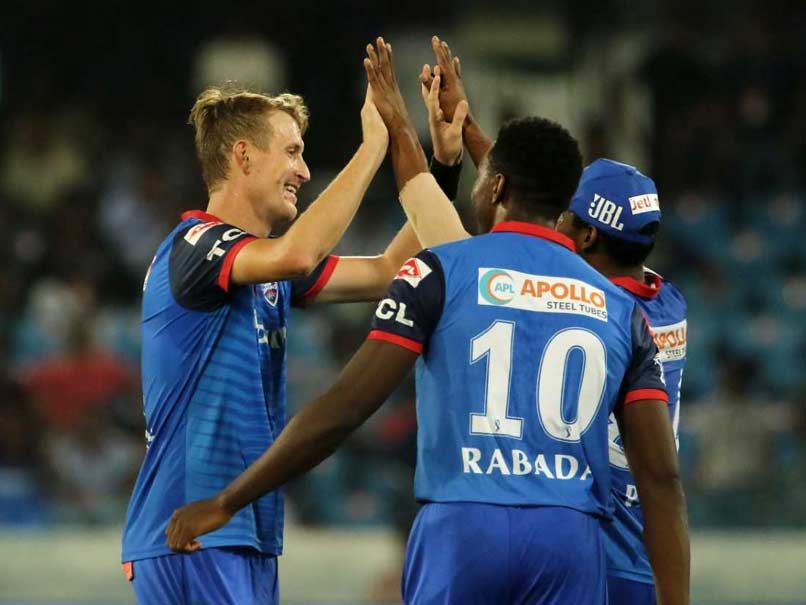 South African pace duo Kagiso Rabada (4/22) and Chris Morris (3/22) displayed disciplined bowling performances as Delhi Capitals bundled out SunRisers Hyderabad 116 runs to register win by 39 runs at the Rajiv Gandhi International Stadium in Hyderabad on Sunday. Pacer Keemo Paul (3/17) ran through the SunRisers top-order before his pace colleagues Rabada and Morris triggered mayhem in the middle and lower order as the home side suffered a batting collapse after 15 overs while chasing 157 for a win.

The SunRisers were 101 for 3 in 15.2 overs when Ricky Bhui fell to Paul but after that they lost seven wickets for the addition of just 15 runs.

Morris took three wickets in the space of five balls in the 18th over as the stunned home crowd watched their side's batsmen capitulating without much fight as the innings folded at 116 in 18.5 overs.

David Warner, who top-scored with a 47-ball 51, was out in the 17th over off Rabada to trigger a procession of Sunrisers batsmen towards the dressing room. Rabada and Morris took all these six wickets as SunRisers surrenderd tamely.

With the win, the Delhi Capitals jumped to second spot with 10 points from eight matches while the Sunrisers are at the sixth spot after their third consecutive loss.

The SunRisers' openers Warner and Jonny Bairstow (41) made a watchful start as they looked for accumulating runs without taking risks.

Warner was uncharacteristically slow and it was left to Bairstow to take the chances. Bairstow hit Ishant Sharma a couple of fours and a six off Morris but the home side could only score 40 for no loss at the end of first powerplay overs.

The opening duo reached the 50-run mark at the end of the eighth over and they began to look for big shots. The Sunrisers, however lost Bairstow at an inopportune juncture with Paul getting rid of him in the 10th over.

At the halfway stage, the Sunrisers were 73 for 1 with 83 more runs needed for a win and they were on track. But the dismissal of captain Kane Williamson (3) off the bowling of Paul in the 12th over was the beginning of the pressure which began to pile on the Sunrisers. Warner was still there but the Delhi bowlers gave him little chance to open up his arms on a sluggish pitch.

Bhui's dismissal in the 16th over piled on further pressure on the Sunrisers. The asking rate climbed up to 13 an over at the end of 16th over and the home side wilted under pressure with Warner finally falling in the 17th over bowled by Rabada as the batsman hit straight to the hands of captain Shreyas Iyer.

Rabada got rid of Vijay Shankar (1) in the next delivery and with it the game was as good as over in favour of Delhi Capitals. It was then the turn Morris to take three wickets in the 18th over before Rabada ended the Sunrisers run chase with two wickets in consecutive deliveries. Earlier, young left-arm pacer Khaleel Ahmed grabbed three key wickets in an impressive spell to help Sunrisers restrict Delhi Capitals to 155 for 7 after the visitors were invited to bat.

The 21-year-old bowler took the wickets of openers Prithvi Shaw (4) and Shikhar Dhawan (7) as well as that of dangerous Rishabh Pant (23) while conceding 30 runs from his four overs.

Senior pacer Bhuvneshwar Kumar returned with figures of 2/33 while leg-spinner Rashid Khan and Abhishek Sharma took a wicket apiece as the Sunrisers' bowlers made it difficult for Delhi batsmen to score runs.

For Delhi, captian Shreyas Iyer top-scored with a 40-ball 45 and his 56-run partnership with Pant for the fourth wicket took them a challenging total after a wobbly start.

Colin Munro was the other notable contributor with a 24-ball 40. Shreyas hit five fours before he was dismissed by Bhuvneshwar in the 16th over while Munro was more aggressive with four boundaries and three sixes in his 24-ball knock.

Delhi Capitals struggled with openers Dhawan and Shaw back into the dressing room by the fourth over with Ahmed accounting for both the key batsmen.

Shaw was the first to go in the second over as he was done in by the extra bounce extracted by Ahmed as the batsman ended up edging the delivery to wicketkeeper Jonny Bairstow.

In his next over, Ahmed got rid of Dhawan who miscued a bounceer off the bowler with Bhuvneshwar Kumar taking the catch at fine leg.

Sunrisers Hyderabad IPL 2019 Sunrisers Hyderabad vs Delhi Capitals, Match 30 Cricket
Get the latest updates on IPL 2021, check out the IPL 2021 Schedule and Indian Premier League Live Score . Like us on Facebook or follow us on Twitter for more sports updates. You can also download the NDTV Cricket app for Android or iOS.