SRH are now at the top of the IPL table with two wins in three matches. RCB are yet to register a win and have now suffered two heavy defeats. 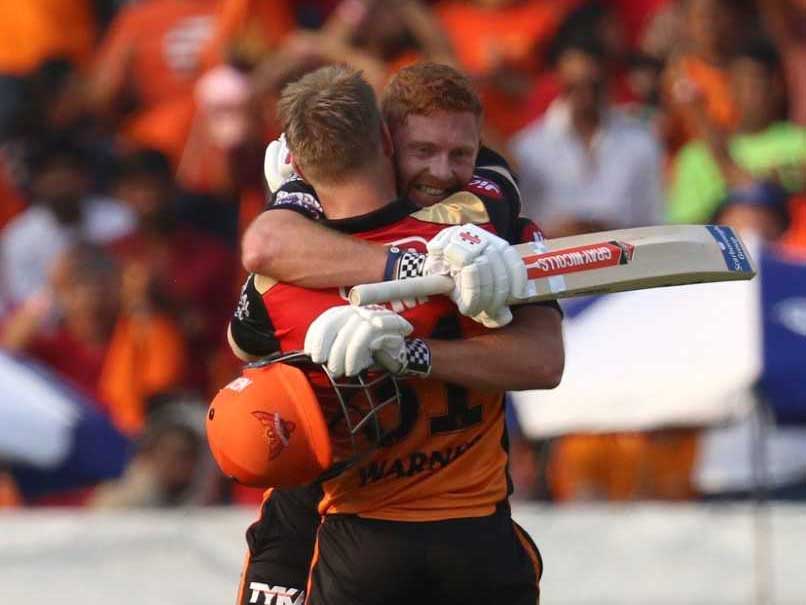 Jonny Bairstow and David Warner smashed sensational centuries to guide SunRisers Hyderabad to a comprehensive 118-run win over struggling Royal Challengers Bangalore in an Indian Premier Leaguematch here on Sunday. England's Bairstow struck 114 from just 56 balls while Warner carried his bat for a 55-ball 100 in a record 185-run first-wicket partnership to post a mammoth 231 for two after being put into bat. Mohammed Nabi starred with the ball for SunRisers with figures of four for 11, while Sandeep (3/19) too was not far behind, scalping three wickets.

Bairstow punished RCB with 12 fours and seven sixes while Warner hit five fours and as many sixes in his 55-ball knock.

With a gigantic target to eclipse, RCB needed a rollicking start but the visitors' chase never got going as they kept on losing wickets to be bundled out for 113 in 19.5 overs. It was RCB's third consecutive loss in the tournament, while Sunrisers registered their second win out of three games this season.

Playing his first IPL match this season, Afghan all-rounder Mohammad Nabi did the early damage as he picked up three quick wickets -- two in his second over -- as RCB's slumped to 22 for three by the end of the fourth over.

Nabi first accounted for Parthiv Patel and then came back to remove Shimron Hetmyer and dangerous AB de Villiers in the fourth over.

To make matters worse for RCB, Sandeep Sharma then dismissed skipper Virat Kohli in the first delivery of the seventh over. As if that was not enough, Shivam Dube was run out in the very next ball as RCB's chase fell by the wayside.

The visitors slumped to 35 for six in 7.3 overs. From there on, it was almost an impossible task for RCB to get back into the game and Colin de Grandhomme (37) and 16-year-old Prayas Ray Barman (19), the youngest player to make his IPL debut, just did their bit to delay the inevitable.

Earlier, RCB captain Kohli's decision to put SunRisers in backfired as all his bowlers were taken to cleaners by Bairstow and Warner who became the first pair in IPL history to post three consecutive hundred-run stands.

Bairstow and Warner bludgeoned the bowlers, bettering the earlier highest of 184 between KKR's Gautam Gambhir and Chris Lynn in the 2017 edition against Gujarat Lions.    Sunday's innings was also only the second time in IPL history in which two batsmen scored a hundred each.

Bairstow was finally out in the 17th over off Yuzvendra Chahal as he went for yet another big shot but only got the leading edge for Umesh Yadav to take a running catch. He reached to his hundred in 52 balls.

He was particularly harsh on 16-year-old Ray Barman, from whom he took 17 runs in the ninth over. He later smashed De Grandhomme for 14 runs in the 10th over. He also did not spare India pacer Umesh who he hit for 16 runs in the 12th over.

Warner played second fiddle all this while and allowed Bairstow to take the initiative but hit fours and sixes in between. The Australian later swung his arms to complete his hundred.

Mohammad Nabi IPL 2019 Sunrisers Hyderabad vs Royal Challengers Bangalore, Match 11 Cricket
Get the latest updates on ICC Women's Cricket World Cup 2022 and IPL 2022, check out the Schedule , Live Score and IPL Points Table. Like us on Facebook or follow us on Twitter for more sports updates. You can also download the NDTV Cricket app for Android or iOS.